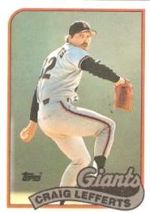 Craig Lefferts was a left-handed pitcher who was with Team USA in the 1979 Pan American Games. He started his major league career as a reliever with the Chicago Cubs and San Diego Padres. He led the National League in games pitched in 1986, with 83. He was credited with two wins in the 1984 NLCS, when the Padres upset his former team, the Cubs, to reach the World Series for the first time in team history. In the 1984 World Series, he gave up no runs in 6 innings and picked up a save in the Padres' only win over the Detroit Tigers. Lefferts was a workhorse in those early years, pitching over 100 innings three times between 1983 and 1989, and never fewer than 83 1/3.

He was one of a number of pitchers the San Francisco Giants acquired in mid-year in 1987, when they won a division title; Craig pitched well after his acquisition, going 3-3, 3.23 in 44 games with San Francisco and ran his scoreless postseason streak to 12 innings with three runless appearances in the 1987 NLCS. In 1989, the Giants gave him a chance to close games on a regular basis, and he responded with 20 saves, then reached that total the next two seasons while back with the Padres. In 1992, the Padres decided to use him as a starter, and it worked out quite well: in 27 starts for the team, he went 13-9 with a 3.69 ERA, good enough for the Baltimore Orioles to acquire him in order to use him as a starter in an unsuccessful late-season playoff run. Overall, he was 14-12, 3.76 in 196 innings between the two teams, all career highs. After the season, he signed as a free agent with the Texas Rangers, but was hit hard as a starter early in 1993 and went back to the bullpen, where he finished the season 3-9, 6.05. He then pitched one more year, for the California Angels in 1994, before calling it quits.

Craig Lefferts is the last pitcher in major league history to have hit a walk-off home run. It came off Greg Minton of the Giants in the 12th inning on April 25, 1986.

Lefferts was the pitching coach for the South African national team in the 2013 World Baseball Classic Qualifiers in Jupiter, FL in September of 2012.