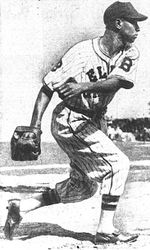 Jonas Gaines pitched in the Negro Leagues for ten years, the minor leagues for three years, the Manitoba-Dakota League for two, Nippon Pro Baseball for one and the Mexican League for one. He also missed three seasons while serving his country during World War II.

Jonas fell to 4-5 in 1942 but made the first of three All-Star teams in the Negro Leagues. In the first 1942 East-West Game, he allowed one unearned run and one hit in three innings in a 5-2 win for the East; he started the game and was relieved by Dave Barnhill. In the second game, he relieved Gene Smith with a 5-2 lead in the 4th and tossed two shutout innings, with one hit and two whiffs, before being replaced by Barnhill; the East won again, 9-2.

Gaines missed 1943-1945 while serving in the US Army. The Southern University alumnus was 32 years old when he returned to Baltimore in 1946 but he did not miss a beat, going 9-4. Lefty tossed scoreless ball in the 7th and 8th innings of the first 1946 East-West Game, giving up one hit in a 6-3 victory for the East. He had relieved Bill Byrd and was relieved by Leon Day. In game two, he tossed 2 1/3 hitless, walkless, scoreless innings, fanning one after relieving Byrd with a 4-0 deficit in the 5th. He was again relieved by Day. His great work was not enough as the East lost, 4-1. That winter, he was 1-1 for Almendares in the Cuban Winter League but walked 17 in 14 2/3 innings.

Gaines was 5-4 in 1947 and 9-4 in 1948, putting him fourth in the Negro National League in wins behind Byrd, Max Manning and Joe Black. Jonas was with the Philadelphia Stars in 1949 and 1950. In the 1950 East-West Game, he relieved Raul Galata in the 6th and tossed two shutout innings, giving up two hits and striking out three before Pat Scantlebury relieved him; the East still lost, 5-3.

The Louisiana native spent 1951-1952 in the Manitoba-Dakota league. In 1952-1953, he returned to Cuba with Cienfuegos, going 1-1 with a 6.00 ERA and 15 walks in 9 innings. He then signed with Japan's Hankyu Braves, joining Larry Raines as the fourth and fifth black players in NPB history, one year after Hankyu had Jimmy Newberry and John Britton (and 17 years after Jimmy Bonner). He was the third black pitcher in Japan, following Bonner and Newberry. In 1953, the 39-year-old went 14-9 with a 2.53 ERA for Hankyu. He walked 94 in 220 2/3 innings, better control than he had shown in Cuba or Mexico if by no means good. He was 6th in the Pacific League in ERA and his 142 strikeouts were more than any other hurler in the PL's top 10 in ERA; he was still 38 shy of league leader Yasuo Yonekawa.