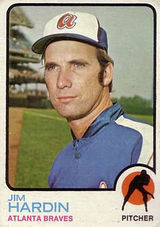 Jim Hardin was a pitcher for the Baltimore Orioles, New York Yankees and Atlanta Braves from 1967 through 1973.

With the Orioles, he was a member of one of the best pitching staffs of the 1960s and 1970s that included Jim Palmer, Dave McNally, Tom Phoebus and Mike Cuellar. Hardin earned a championship ring in the 1970 World Series and was part of the dominant 1969 American League champions who lost that year's World Series to the "Miracle Mets". An 18-game winner in 1968, Hardin pitched 4 1/2 years with Baltimore, half of a season with the New York Yankees and one year with the Atlanta Braves. He finished his career with a record of 43-32 and a 3.19 ERA. Over the course of six major league seasons, Hardin's teammates included such luminaries as Hank Aaron, Boog Powell, Brooks Robinson, Frank Robinson, Felipe Alou, Dusty Baker, Paul Blair, Mel Stottlemyre, Don Baylor, Davey Johnson, Thurman Munson, Phil Niekro, Orlando Cepeda, and Mark Belanger.

He was a catcher until his sophomore year of high school, disputing with Tim McCarver the title of best high school catcher in Memphis, TN. His career changed when his team was short a pitcher the next year and he took the mound, showing outstanding potential. He enrolled as a pitcher at the University of Memphis, leaving to sign a contract with the expansion New York Mets in 1962, figuring he would have a chance to reach the majors quickly. However, he struggled with his control in the minors, walking 184 batters in as many innings over his first two seasons. He was picked up by the Orioles in the 1965 minor league draft and began to do better in his new organization. He pitched a no-hitter for the Elmira Pioneers of the New York-Penn League over the Williamsport Mets on May 18, 1966. It was a six-inning effort with a final score of 4-1. He finished 8-2 with a 3.44 ERA and credited George Bamberger for straightening him out - he basically told him to stop nibbling and start challenging hitters with his superior stuff.

Attending his first spring training with the Orioles in 1967, he lost out on a chance to make the team when he was bitten by a stingray while walking in shallow waters near Key Biscayne, FL. He was assigned to the AAA Rochester Red Wings to start the year and got the promotion to Baltimore in June after going 5-3, 2.04 in the early going. He did very well for the O's, with a record of 8-3, 2.27 in 19 games. He then had what would prove to be his best season in 1968, when he went 18-13 with a 2.51 ERA and 160 Ks in 224 innings.

On May 10, 1969, in a relief appearance, Hardin hit a game-winning walk-off home run in the bottom of the 9th inning in Baltimore's Memorial Stadium. On July 27th, Hardin starred in the Orioles' most dominant shutout victory in their history, routing the Chicago White Sox 17-0. Hardin took the win over Chicago's Billy Wynne, allowing just two hits while the Birds banged out 20, good for 39 total bases. Hardin tossed a two-hitter with five strikeouts. He also hit a home run in 4th inning off Gary Bell.

He pitched a complete game shutout on May 26, 1970 against the Cleveland Indians who had only five singles for the game. Three weeks later, Hardin pitched ten innings surrendering only six hits with zero walks versus the Washington Senators. The game finished with the score of 3-2 in favor or the Orioles, in 13 innings. Pete Richert earned the win in three innings of relief. In Cleveland on August 6th, he threw a complete game five-hitter in the second game of a doubleheader against the Indians. Hardin helped himself with a two-run triple in the 2nd inning and also picked up another RBI by drawing a bases-loaded walk in the 8th inning. That year, he was part of a starting rotation that included three twenty-game winners: Jim Palmer, Mike Cuellar and Dave McNally; for his part, Hardin finished the year at 6-5, 3.53.

He was traded to the Yankees in return for Bill Burbach on May 28, 1971. He pitched only 12 times for the Yankees, going 0-2 with a 5.08 ERA. He was released at the end of spring training in 1972 but soon signed with the Atlanta Braves. On June 28th, he hit a two-out solo home run in the 4th inning off the San Diego Padres' Fred Norman in San Diego Stadium. He went 5-2, 4.41 as a swingman in what was his last season in the majors. He retired and became an account representative for the Xerox Corporation and worked as a golf pro at a club in West Palm Beach, FL. He also took part in fishing competitions, soon acquiring his own boat and private plane.

Jim Hardin died on March 9, 1991 when his Beechcraft Beech 35-C33A crashed in Key West, FL. Shortly after taking off from Key West International Airport, the propeller of his aircraft failed due to fatigue, the engine stalled and the plane crashed while Jim attempted to perform an emergency landing. It came to rest in a parking lot of the TGI Fridays restaurant (which was under construction) located at 2710 North Roosevelt Boulevard, killing him and his two passengers. Jim is one of three former Yankees players who have died in aviation accidents, including catcher Thurman Munson in 1979 and Cory Lidle in 2006; all three were private planes which the player was piloting (although in Lidle's case, it was never clearly determined whether he or his flight instructor was in command when his plane crashed).