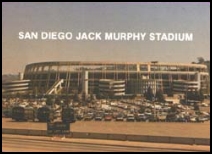 Jack Murphy Stadium was known as San Diego Stadium from 1968 to 1980 and Qualcomm Stadium from 1997 to 2003. The stadium's first tenant was the San Diego Chargers of the National Football League, who continued to call the stadium home after the Padres moved to baseball-only Petco Park in 2004.

The stadium was built after intense lobbying led by local sportswriter Jack Murphy, who argued that San Diego needed a major league caliber stadium to attract a major league baseball team. The stadium opened in the fall of 1967 and was ready to host the Padres when they began play in 1969. After Murphy died in 1980, the stadium was renamed in his honor, but the city of San Diego then decided to sell naming rights to the park in 1997, after which it took the name "Qualcomm Stadium", which was never popular among baseball fans. It is still widely called Jack Murphy Stadium or "the Murph" by San Diegans.