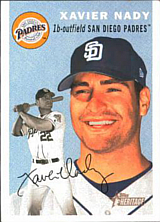 Xavier Nady hit .619 as a high school senior. The St. Louis Cardinals took him in the fourth round of the 1997 amateur draft, but he did not sign. The next year, he batted .404 and slugged .776. He was a second-team All-American at second base according to Baseball America, the only freshman on their three All-American teams. He was named the Baseball America Freshman of the Year and set University of California records for doubles (28) and slugging; they previously had been held by Jeff Kent and Kevin Maas and also set a school record with 173 total bases. He set a university freshman home run record (15) and was third in the Pacific-10 Conference in average, led in doubles and joined Erik Mattern as the All-Conference second basemen; Nady lost votes as he was also picked by some at shortstop.

He followed by being named Baseball America Summer Baseball Player of the Year after hitting .414 with 17 homers and 43 RBI for team USA in 1999, leading the club in every category and falling 3 homers shy of Tino Martinez's 9-year-old USA baseball home run record. He slugged .850 and led the team in runs (42) as well.

In 1999, Nady had a fine encore performance by batting .374/, slugging .762 and making first-team All-America according to Baseball America, which named him the top third baseman in the country. He again was an All-Conference selection and his 23 homers were second in the Pac-10. At age 21, Xavier had a disappointing .329/?/.643 year and fell to third-team All-American at third base and was again an All-Conference choice. He had been rated by many as the top college prospect entering the year but the relatively poor season and his contract demands led to his slipping to the 49th pick of the 2000 amateur draft, when the San Diego Padres picked him and signed him for $1.1 million. Overall, he had set Cal records for career RBI (191), total bases (479) and homers (57) and set a Pac-10 record for slugging (.729), breaking Mark McGwire's record.

Signing late, Nady became the first player to go straight to the majors since Darren Dreifort six years prior and went 1 for 1 for the 2000 Padres. He went to the Arizona Fall League but was sidelined by elbow problems. Baseball America rated him the #7 prospect in the Padres chain. In '01, he moved to first base and played well for the Lake Elsinore Storm, hitting .302/.382/.527 with 96 runs, 38 doubles, 26 homers and 100 RBI. He led the California League in extra-base hits (65), total bases (276) and fielding percentage at first (.989). He made the league All-Star team at first, was named Rookie of the Year and Cal League MVP. Baseball America rated him the #4 prospect in the Padres system and the top power prospect, top batting prospect and best defensive 1B in the California League.

Nady was sidelined in spring training of 2007 with an inflamed intestine which caused him to be hospitalized three days and undergo testing. It was finally diagnosed as a viral infection, alleviating concerns that it might be a chronic digestive disorder. Nady suffered hamstring problems repeatedly in 2007, but remained Pittsburgh's most consistently productive hitter throughout the season. Nady had two notable game-tying homers in the 9th inning off of Houston closer Brad Lidge - on Opening Day and on August 24. He hit 20 home runs for the first time in the majors and finished the season with a .278/.330/.476 batting line and 107 OPS+. He tied David Eckstein, Brandon Phillips and Austin Kearns for 10th in the 2007 NL with 12 times hit by pitch.

Re-signed by New York in 2009, Nady only went 8 for 28 with 4 doubles and a walk before an elbow injury ended his year. He had Tommy John surgery and missed the rest of the campaign, then became a free agent. He signed with the Chicago Cubs in 2010 and got into 119 games as a semi-regular, spending most of his time at first base - especially after Derrek Lee was dealt at the trading deadline - and right field. He hit .256 with 6 homers and 33 RBI. He moved to the Arizona Diamondbacks in 2011, where he filled a similar role. On August 12th, he was hit by a pitch thrown by Dillon Gee of the New York Mets, breaking his left hand. He was hitting .248 in 82 games at the time and did not play again that season. He started 2012 with the Washington Nationals but only hit .157 in 40 games and was released at the end of July. He landed on his feet again, finding a job with the San Francisco Giants in time to be part of their run to a World Series title; he hit .240 in 19 games, then went 0 for 5 in the NLDS in his only postseason action.

Unable to land a major league job in 2013, Nady went back to the minor leagues, playing 124 games between the Omaha Storm Chasers in the Kansas City Royals organization and the Colorado Springs Sky Sox, the Colorado Rockies' AAA affiliate. He hit .309 in 71 games for Omaha and .278 in 53 games for Colorado Springs, for a combined batting line of .296/.360/.456, with 26 doubles, 15 homers, 69 runs and 65 RBI. In January of 2014, his original team, the San Diego Padres, brought him back on a minor league contract associated with an invitation to spring training. He was successful in making the team as a substitute, lasting until May before his release. Following a brief cameo in the Seattle Mariners organization, he retired.

In June of 2015, Nady replaced Rod Barajas as hitting coach of the Lake Elsinore Storm, remaining on the staff through 2016.