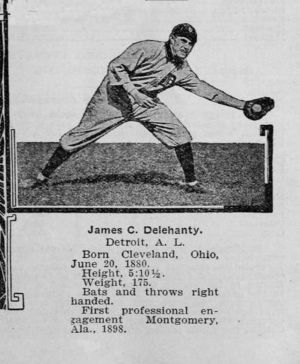 Jim Delahanty was one of five Delahanty brothers to play in the majors. He had a 13-year career and was a fine player, but was largely overshadowed by his older brother Ed, one of the best baseball players of the 19th century. He never developed an attachment with a particular team, although he found a home for several years late in his career with the Detroit Tigers at the time of Ty Cobb and Wahoo Sam Crawford.

Jim was a strong hitter, with a career major league Adjusted OPS of 122.

He was born in Cleveland, OH, the fourth of five brothers who would all play in the major leagues. The eldest, and greatest player, among the brothers, "Big Ed" Delahanty, was 12 years older than Jim and not as much of an influence on him as were his middle brothers, Joe Delahanty and Tom Delahanty, who were much lesser players however. In part due to name recognition, Jim got a first chance to play professionally with Fort Wayne of the Inter-State League in the mid-1890s but was not yet ready for such a level of competition. He got his first serious experience with Lima of the Northwest Ohio League as a third baseman in 1897. He was nicknamed The Yellow Kid, after a popular comic strip character of the day, and played well enough to be offered a contract with Montgomery of the Southern League in 1898. However, the league folded, and he ended up with Allentown of the Atlantic League, where his brother Tom was playing; Joe joined them shortly thereafter, giving the team a trio of Delahantys in the infield. The League folded after the 1899 season and Jim ended up with Worcester of the Eastern League, the forerunner of the International League. He hit .281 in 80 games that season and his contract was purchased by the Chicago Orphans for the 1901 season, after a bidding war.

Delahanty's first taste of the Major Leagues was nothing great, as he hit only .190 in 17 games and quickly lost his spot as the Orphans' starting third baseman. He then broke his kneecap, came down with malaria and was sent home in June, ending a dismal season. He was then sold to the New York Giants. Now starting in right field in 1902, he disappointed once again, batting .231 in 7 games before being released. He went to the Little Rock Travelers of the Southern Association where he played third base and hit .328 and led the league in triples. The next season, he was the league's batting champion at .382, although missing some time with a cracked shoulder blade, and learning of his oldest brother's death in July.

Jim Delahanty's success in the minor leagues led to another major league offer, this time with the Boston Beaneaters in 1904. He played regularly over the next two seasons, hitting .285 in 142 games the first season, adding 27 doubles and 60 RBI as Boston's third baseman, In 1905, he moved to left field but fell to .258 with reduced power in 125 games. He pitched in one game each of his two seasons with Boston, and over the course of his career would play every position on the diamond except catcher. He was then traded to the Cincinnati Reds for Al Bridwell and became the Reds' starting third baseman in 1906, batting .280 with 21 doubles in 115 games. Moving once again, he was sold after the season to the St. Louis Browns. In his first taste of the American League, he hit only .221 in 33 games for the Browns, prompting a sale to the Washington Senators on June 11th. He did much better in the nation's capital, batting .292 in 108 games as a utility player over the remainder of the 1907 season, then posting a career-high .317 batting average as a second baseman in 1908. That year, he was suspended by American League President Ban Johnson for an incident in a game at Cleveland where he was ejected by umpire Silk O'Loughlin then unleashed a torrent of insults that could be heard throughout the ballpark. The suspension was that he could not play in any further games at Cleveland that season, but his manager Joe Cantillon decided to sit him down against the other pennant contenders - Detroit, Chicago and St. Louis - in order not to unduly influence the pennant race, meaning that he missed 27 games as a result. Delahanty thought the suspension was unfair, claiming that his protests to O'Loughlin were made in a normal voice; he did have a reputation as "one of the classy boys of the American League", according to writer Alfred Spink, so the incident, whatever its true extent, was uncharacteristic.

In August of 1909, Delahanty was traded to the Detroit Tigers for Germany Schaefer and Red Killefer. That sent him to his seventh team in only eight seasons. He was hitting only .222 at the time, but bounced back somewhat in his 46 games with the Tigers, batting .253 with 10 doubles in taking over at second base for Schaefer. He played in all seven of the games of the 1909 World Series against the Pittsburgh Pirates, batting .346 with five doubles. The Tigers lost, but he was probably their best player in the Series. In 1910, he hit .294 in 106 games, then had his best offensive campaign in 1911, posting a batting average of .339 in 144 games; he slugged .463, got on base at a .411 clip, scored 83 runs on 184 hits, hit 30 doubles and 14 triples as one of the best offensive players in the American League. He moved to first base partway through the season, as he had lost a step in the infield. He continued to hit well in 1912, with a .286 BA and .397 OBP, but he was still released at the end of the year. Speculation is that ownership did not appreciate his being one of the leaders of the Detroit players' strike on May 18 in solidarity with teammate Ty Cobb after he was suspended for going after a fan in the stands three days earlier.

Jim Delahanty played with the Minneapolis Millers of the American Association in 1913 and at the beginning of 1914, when the newly-formed Federal League came calling. He signed with the Brooklyn Tip-Tops and hit .290 in 74 games. He played again for Brooklyn in 1915, batting .240 in 17 games before being released. He continued as player-manager with Hartford of the independent Colonial League, leading the league with a .379 batting average and taking them to the championship. He then was player-manager with the Beaumont Oilers of the Texas League at the start of the 1916 season, but quit in spite of hitting .306 in 88 games. That was his last effort in baseball. He moved back to Cleveland and worked as a truck driver for the city of Cleveland. He died there in 1953.