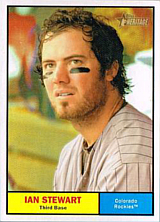 Third baseman Ian Stewart was selected by the Colorado Rockies in the first round of the 2003 amateur draft and debuted in the majors four years later. He is the son-in-law of Joe Mikulik, having married Joe's daughter, Susan, in 2006.

In 2002, Stewart was on the USA junior national team and hit .329 while slugging .532 as their first baseman. He batted .462 and slugged 1.048 as a high school senior and Baseball America named him to their high school All-American team. The other players picked for the non-1B infield slots were Brandon Wood and Eric Duncan. Thanks to Stewart and Ian Kennedy, his school was ranked first nationally before the season started before finishing third with a 30-2 record.

When the Colorado Rockies took Stewart 10th overall in the 2003 amateur draft, he was the 5th high schooler and second infielder chosen (after Rickie Weeks). He was signed by scout Todd Blyleven for a $1,950,000 bonus. He debuted with the Casper Rockies, hitting .317/.401/.558. His 10 homers were two shy of the Pioneer League lead and his 43 assists tied Agustin Murillo for the lead among league third basemen. He made the league All-Star team at 3B.

Stewart had a fine 2004 season. He led Rockies farmhands with 300 total bases and hit .319/.398/.594 for the Asheville Tourists, where he was managed by future his father-in-law. He scored 92 runs, drove in 101 and had 9 triples and 30 HR, stealing 19 bases in 28 tries. He led the South Atlantic League in extra-base hits (70), slugging percentage and total bases. He was two homers behind leader Jon Benick and was sixth in average. He led league third basemen in assists (308) and double plays (27) and made the league All-Star team at third base. He failed to win MVP honors; those went to Brandon Moss. Baseball America named him the top power prospect, top batting prospect and most exciting player in the league and the top third base prospect in baseball. They ranked him as the #2 prospect in the SAL overall behind Delmon Young.

Stewart injured his left hamstring in spring training of 2005. He returned a month into the season and batted .274/.353/.497 for the Modesto Nuts with 32 doubles, 17 homers and 86 RBI. He made the California League All-Star team at third base and Baseball America picked him as the league's #4 prospect, behind Brandon Wood, Stephen Drew and Howie Kendrick and right ahead of Billy Butler. Stewart hit .333/~.435/.615 for the Peoria Javelinas that fall before a right wrist injury cut his year short. Baseball America picked him as the #7 prospect int he Arizona Fall League, between Jarrod Saltalamacchia and Lastings Milledge.

In 2006, Ian was named Colorado's spring MVP after hitting .396 and slugging .896. With the AA Tulsa Drillers, he batted .268/.351/.452 with 41 doubles. He led Texas League third basemen in assists (252) and double plays (38). For the first time, he failed to make his league's All-Star team; Alex Gordon got the nod instead. Baseball America picked him as the TL's #10 prospect, between Juan Gutierrez and teammate Chris Iannetta. He was one of five Tulsa players listed among the top 13 prospects, behind Troy Tulowitzki (#3) and Ubaldo Jimenez (#6) and ahead of Iannetta and Joe Koshansky (#13). He was 0 for 4 with a strikeout and three runners stranded as the DH for the USA in the 2007 Futures Game, hitting cleanup between Evan Longoria and Steve Pearce. In the 2007 season, Stewart batted .304/.379/.478 in 112 games for the Colorado Springs Sky Sox, earning him a call-up to Colorado to replace the injured Jeff Baker.

In his MLB debut, Stewart started at third base and hit 8th. In his first time up, he flew out to LF Matt Murton while batting against Rich Hill. He hit only .209/.261/.372 in 35 games for the 2007 Rockies with one walk to 17 strikeouts. He split 2008 between Colorado Springs (.280/.372/.607, 65 runs scored in 69 games) and the 2008 Rockies (.259/.345/.455, 94 K in 266 AB). By 2009, he was starting at third base for Colorado and batting .228/.322/.464 with 25 home runs and 138 strikeouts; his OPS+ was 95 as his power and walks compensated some for his low average. In 2010, he managed to raise his average to .256, but his power fell, with 14 doubles, 18 homers and 61 RBI. Still, his OPS+ was 97, slightly better than the previous season. In 2011, the bottom fell out completely. He batted only .156 and played just 48 games, losing his starting job and heading back to the minor leagues. He did better in AAA, hitting .275 with 14 homers in 45 games for Colorado Springs. After the season, the Rockies traded him to the Chicago Cubs, along with P Casey Weathers, in return for a player with a very similar profile, OF Tyler Colvin, a former top draft pick coming off a .150 sophomore season after showing excellent promise as a rookie; the Rox also received infielder (and true prize of the deal) D.J. LeMahieu as a throw-in in the deal. It was clear that the Cubs were looking for Stewart to bounce back, as he was stepping into a vacant third base job, with incumbent Aramis Ramirez still on the free agent market and unlikely to re-sign.

Stewart played 55 games for the Cubs in 2012, improving on his dismal last season for the Rockies, but still only hitting .201/.292/.335 with 5 homers and 17 RBI. He was sent back to the minors, with the AAA Iowa Cubs, at the start of the 2013 season, and he was unhappy about this development. After a game on June 10th, he went on a two-hour Twitter rant in which he criticized the Cubs organization and big league manager Dale Sveum. GM Theo Epstein did not react kindly, immediately announcing that Stewart was being suspended without pay for an indefinite period. Stewart issued an apology, stating: ""I let my frustrations get the best of me and in no way want to be a distraction." He was hitting only .164 in 39 games at the time, and in danger of being released at any time. On June 25, two weeks later, he was released.

Ian came back briefly to the majors with the Los Angeles Angels of Anaheim in 2014. In 24 games, he hit .176 with 2 doubles and 2 homers, but 3 triples. His career wrapped with a stint in the Washington Nationals chain in 2015.