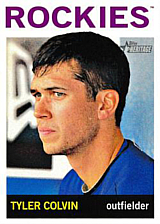 Tyler Colvin played six seasons in the big leagues. He enjoyed two strong, non-consecutive seasons as a semi-regular, but failed to hit better than .225 in any of his other four.

Colvin was the Chicago Cubs first rounder in the 2006 amateur draft, signing with scout Antonio Grissom for $1.475 million. He debuted that year with the Boise Hawks, hitting .268 with 11 homers and 53 RBI in 64 games. He was 0-for-5 and struck out 3 times in the 2007 Baseball World Cup as the backup right fielder to Justin Ruggiano. Colvin made his major league debut with the Cubs at the end of 2009, being called up after controversial outfielder Milton Bradley was suspended for the remainder of the year. Playing center field, he obtained a hit in each of his first two starts against the Milwaukee Brewers. He was a quasi-regular as a rookie in 2010, playing 111 games in the outfield, although he shared those games between all three outfield positions. He showed good power, hitting 18 doubles, 5 triples and 20 homers in 358 at bats, with a batting line of .254/.316/.500. His season ended early, on September 19th, when he was hit in the chest by a fragment of teammate Welington Castillo's shattered bat while standing in the on-deck circle. He suffered a punctured lung but made a full recovery.

Colvin struggled mightily in his sophomore season in 2011, batting a measly .150/.204/.306 in 80 games. He showed a bit of the previous year's power, with 8 doubles and 6 homers, but overall was a major disappointment, as he had been counted on to be the team's right fielder. After the season, the Cubs traded him to the Colorado Rockies in a four-player deal that brought a very similar player to Chicago in third baseman Ian Stewart, himself coming off a .156 season. Also part of the deal were future All-Star and batting champ D.J. LeMahieu, heading to the Rockies, and pitcher Casey Weathers, who headed to Chicago. Tyler made an excellent comeback in his first season with the Rockies in 2012, hitting .290/.327/.531 in 136 games, with 27 doubles, 10 triples and 18 homers. His OPS+ was 114, and right field was his most common position, although he also saw playing time at the two other outfield spots and first base. Just when he seemed to have put his career back on track, 2013 was a disaster, as he fell to .160/.192/.280, striking out 27 times in 75 at bats with 3 homers and 10 RBI in 27 games. He was demoted to the AAA Colorado Springs SkySox, where he hit .275 with 9 homers and 32 RBI in 67 games, mediocre results as he was playing in a very hitter-friendly home park. He was also injured for part of the year, victim of back tightness.

On February 22, 2014, Colvin signed a minor league contract with the San Francisco Giants as a long shot to make the Opening Day roster. He was called up in May and did not light the world on fire, batting .223/.268/.381 with 2 home runs in 57 games. He was designated for assignment in August and became a minor league free in October. He kicked around until 2018 trying to make it back to the bigs, last spotted with the Long Island Ducks of the Atlantic League.