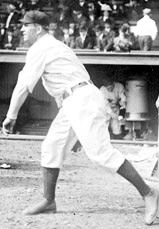 "And do you know that we ran Harry Coveleski clear out of the league the next season. It was the craziest, most foolish thing that had ever happened. McGraw was told by a friend of his who had managed Coveleski in the minor leagues... that Coveleski always carried some bologna in his back pocket and chewed on that bologna throughout the game... So this manager told McGraw, and McGraw saw to it that some of us players would always meet Coveleski as he was going to and from the pitcher's box whenever he pitched against us... Well, this so upset this fellow that he couldn't pitch against us to save his life. He never beat us again, word got around the league and the other clubs started doing the same thing and it chased him right back to the minors..." - Fred Snodgrass, point to Lawrence Ritter, The Glory of Their Times

"Most people think it was Merkle lost the 1908 pennant for the Giants. Well, they're wrong. It was Harry Coveleski. He was just a rookie but he beat the Giants three times in the last week of the season. Pitched every other day for a week and beat them three in a row... "Giant Killer" Coveleski they called him after that. They say McGraw never forgave Harry for that. A lot of nonsense. They also say that the Giants ran him out of the league the next season. Something about harmonicas or bologna or something. Supposed to have gotten Harry's goat. What a lot of bull that story is. Nobody ever ran Harry out of any league. What happened is that he got hurt the next season. Went back down to the minors for a few years. But his arm came back later and he came back up with Detroit and did fine." - Stan Coveleski, counterpoint to Lawrence Ritter, The Glory of Their Times

Nicknamed "The Giant Killer" for his prowess against the New York Giants during the stretch run of the 1908 campaign, pitcher Harry Coveleski was the older brother of Hall of Fame pitcher Stan Coveleski and one of four professional players in the family (alongside John and Frank Coveleski).

Born Harry Frank Kowalewski to a Polish immigrant family in the coal mining country of eastern Pennsylvania, he began working in the coal mines as a teenager while playing baseball in his free time. He was scouted by the St. Louis Cardinals and signed with the Kane Mountaineers of the Inter-State League in 1907. When the league folded, he played on a semipro team in Wildwood, NJ, alongside his brother John. He was spotted by the Philadelphia Phillies and signed a major league contract in September 1907, ending an unlikely year by pitching 20 innings in the bigs without allowing an earned run.

He played for the Lancaster Red Roses of the Tri-State League in 1908 and did very well, going 22-15 with 232 strikeouts in 304 innings. When the season ended, the Phillies called him up and he became a key figure in one of the greatest pennant races of all time. Harry defeated the New York Giants three times in their final five games, spinning a shutout on September 29th at the Polo Grounds before holding the Giants to two runs in starts on October 1st and October 3rd at the Baker Bowl. He was given a $50 bonus by manager Billy Murray for his performance, and the Giants ultimately lost the pennant to the Chicago Cubs. The Giants, of course, later gloated that they ran him out of the league the next season by taunting him, but his problems actually resulted from a sore arm.

Coveleski was traded to the Cincinnati Reds in 1910 and then sent to the minors, struggling for a few seasons. After leading the Southern Association with 28 wins for the Chattanooga Lookouts in 1913, he caught the eye of the Detroit Tigers. His contract was purchased for the 1914 season and he recovered to become a three-time 20-game winner for the club between 1914 and 1916, leading the AL with 50 appearances in 1915. He was a real workhorse during that period, pitching 940 1/3 innings in the span with a 65-36 record and 2.30 ERA. His 2.34 ERA in parts of five seasons remains the lowest in Tiger history. He soon suffered arm troubles again and was out of the majors by the middle of the 1918 season. His attempts to come back in the minors were unsuccessful, and he was out of baseball by 1922. His main teammates included Ty Cobb (2,922), Bobby Veach (1,925) and Sam Crawford (1,736).

During their careers, Harry and Stan agreed never to play against each other and their managers always arranged for them not to. They did play in the same game on occasion, when one of the brothers was called in relief in a game in which the other was pitching or had pitched.

Following his baseball days, Coveleski became a police officer in his hometown and later operated a tavern.