Harris McGalliard, also known as Bucky Harris in Japan, was an American catcher in Nippon Professional Baseball. He was one of the first foreign professional players in Japan, playing for Nagoya in 1936. He would also play for the Eagles (1937-1938).

The 1931 Los Angeles Nippons, McGalliard is in the top row third from the left.

After attending the University of Southern California, McGalliard embarked on a minor league career in the late 1920s. However he soon came to the conclusion that he was not headed for the Major Leagues. He then joined the Los Angeles Nippons, a Nisei club. In 1931, the team traveled to Japan were they compiled a 20-5 record versus collegiate and corporate teams.

In 1935, McGalliard and the Nippons played against the Tokyo Giants on April 30. The Japanese club won 14 to 3 behind the pitching of Eiji Sawamura. It was at this game that McGalliard met Atsushi Kono, a former pitcher for Waseda University, who was traveling with the Giants on their tour.

When the Japanese Professional Baseball League was founded in 1936, Atsushi Kono, now the Nagoya general manager, inquired of Sotaro Suzuki of the Yomiuri Shimbun about any foreign players that he might recommend signing. Suzuki recommended McGalliard to Kono (Suzuki had also accompanied the touring Giants to the United States). 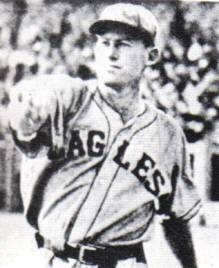 On April 29, 1936 McGalliard was the Nagoya's starting catcher in the first Japan Professional Baseball League game held between Nagoya and Dai Tokyo at Koshien Stadium. In doing so he became the first foreign pro player in the history of the league (Yoshio Takahashi, a Nisei infielder from Hawaii, also started the game for Nagoya but due to his heritage is generally not considered a foreign player). McGalliard had two hits in a 8 to 5 victory for Nagoya, with Hawaiian Herb North earning a relief win.

After the 1938 Fall season, McGalliard returned to the United States, leaving Japan on November 22, 1938, to be there for the birth of his child. It is also speculated that he left due to increasing tensions between Japan and the United States. A few years later, following the outbreak of World War II, McGalliard’s knowledge of Japan would be noticed by the United States Army, who needed interrogators for Japanese prisoners-of-war. After going to Army Intelligence School at the University of Michigan, McGalliard headed of to Leyte in the Philippines.

The following is an excerpt from "His Career Was Made in Japan," a piece by Dave Distel of the Los Angeles Times:

Following the war, McGalliard owned a masonry contracting business in Orange County and retired to Westminster, CA. He died in 1978 at Sunrise Hospital, in Las Vegas, Nevada.