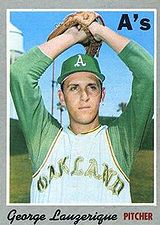 George Lauzerique pitched for 10 years in professional baseball, four of them in the majors. He is most famous for his work with the 1967 Birmingham A's, but had a few impressive seasons on the farm.

He was drafted by the Kansas City Athletics in the 10th round (199th overall) of the 1965 amateur draft.

In 1967 with the Birmingham A's of the Southern League, he went 13-4 with a 2.30 ERA. He edged out Danny Lazar for the SL lead in ERA, by .005. Lauzerique led the SL in winning percentage as well and is recalled as the ace of one of the greatest AA teams in the modern era even though Birmingham also had Rollie Fingers. He easily made the SL All-Star team. He was known though for his no-hitters he lost due to pitch count limits, a modern innovation of the era. Eddie Robinson, the A's farm director, had deemed that pitchers under the age of 22 of 23 should not throw over 100 pitches in a game. On May 11, Lauzerique pitched 7 hitless innings against the Montgomery Rebels but got yanked by John McNamara when he reached 97 pitches. Joe Grzenda came in and allowed two hits. While the pitch-count rule was decried by many, Lauzerique stood up for it, saying "They put in the rule to protect us and I'm all for it." On June 8, he pitched an exhibition against the regular lineup of the 1967 Kansas City Athletics and gave up one single to Bert Campaneris in 7 innings before getting yanked after 97 pitches.

On July 6, Lauzerique threw a perfect game, using only 85 pitches, and allowing "nothing close to a hit" as per The Sporting News. He nearly walked Angel Bravo and Gary Johnson in the seventh inning, going 3-2 on Bravo and 3-2 on Johnson, the final batter. As it was the second half of a doubleheader, only 7 innings were played, giving Lauzerique the perfecto.

He ended up making his big league debut on September 17, 1967, at the age of 19. He pitched seven solid innings against the California Angels, surrendering just four hits. He ended up receiving the loss though, as the Angels beat the Athletics 3 to 2. His ERA in that game was 3.86.

He was able to bring his season ERA down to 2.25 after giving up only one run in the final nine innings he pitched that year. In three at bats that year, he collected zero hits.

He was the seventh-youngest player in the 1967 AL.

Lauzerique struggled in 1968 with the Vancouver Mounties, going 9-15 with a 4.26 ERA, a far cry from his first three years in pro baseball. He tied Danny Morris for the Pacific Coast League lead in losses and was well below team and league average in ERA.

The ninth-youngest player in the 1968 AL, Lauzerique appeared in only one game that year for the 1968 Athletics in his September call-up. On September 15, he pitched one inning in a game that would see the Athletics lose to Bill Freehan and the Detroit Tigers 13 to 0. Lauzerique did not give up a single run, although he did throw one wild pitch and walk a batter.

George started 1969 with the Iowa Oaks, going a solid 5-3 with a 3.12 ERA in a hitter-friendly year in the American Association. Had he qualified, he would have ranked second in the AA in ERA.

In his final season with Oakland, Lauzerique was the sixth most-used starter (in terms of total amount of starts) on the 1969 Athletics. He appeared in 19 games total, starting eight of them and completing one of his starts. In 61 1/3 innings of work, he surrendered 14 home runs, walked 27 and struck out 39. Overall, his ERA was 4.70 (a 73 ERA+), and his record was 3 and 4.

He collected the first two hits of his MLB career in his first game batting all year (the AA had adopted the DH rule that year and he had not swung a bat on the farm): facing the Cleveland Indians in the second game of a doubleheader, he went 2 for 4 with one run scored. His first hit came off Mike Paul and his second came off of Stan Williams. Oddly, those were the only two hits of his entire major league season - he would end up going 0 for 16 the rest of the season.

That game was also his best pitching-wise that season and possibly of his entire major league career. In a complete game, he allowed seven hits, walked only one batter, struck out 11, and gave up only one run for the win.

On December 7, 1969, he was traded from the Athletics with Ted Kubiak to the Milwaukee Brewers for Diego Segui and Ray Oyler.

1970 would end up being Lauzerique's final season in the big leagues. With the Brewers that season, he had the highest ERA among all pitchers on the team with 10 or more innings of work, posting a 6.94 Earned Run Average. He gave up, on average, one home run every five innings that season, surrendering seven in 35 innings of work. He overall record was 1-2.

Although his 1970 season was rather unimpressive, it did have a couple bright spots. For one, he did complete a game that year - on April 17 against the Chicago White Sox - allowing nine hits in nine innings of work but still getting the win.

And, like 1969, he collected two hits in one game, with those being the only two hits of his season. In the second inning of the game, off of pitcher Gerry Arrigo, he hit a single. The next hit in the game would end up being the most noteworthy hit of his major league career: in the fifth inning off of pitcher Tommie Sisk, he hit a three-run home run which scored Phil Roof, Russ Snyder and himself. Overall in that game, he went 2 for 4 with 2 runs and 4 RBI. The Brewers beat the White Sox 16-2.

Lauzerique spent most of the year with the Portland Beavers, going 8-6 with one save and a 5.53 ERA.

On October 20 of that year, he was traded with minor leaguer Jesse Huggins and Jerry McNertney to the St. Louis Cardinals for Carl Taylor and Jim Ellis.

Lauzerique was 4-8 with a 5.70 ERA for the Tulsa Oilers in 1971, saving three games as well. One of his four hits was a home run. In early August, Portland purchased his contract. He was 2-4 with a 4.17 ERA in four starts for them.

After two years away from baseball, Lauzerique returned in 1975 with the Columbus Astros and Dubuque Packers. Used as a reliever, he was a good 4-2 with one save in 16 games, allowing only 25 hits in 36 innings and walking 19. He had a 1.80 ERA in 8 games for Columbus in his first appearance in the Southern League since his great season 8 years earlier. He walked 14 in 20 innings, though, showing some rust.

George finished his career with Dubuque in 1976, going 4-5 with 4 saves and a 4.12 ERA in 33 appearances (one start). He also served as interim manager that year briefly when Bob Cluck was sidelined. Not yet 30 years old, his pitching career was over for good.

As a batter, he hit .121, collecting four hits in 33 at-bats. He walked zero times, struck out 10 times, scored three times and hit one home run. He drove in four RBI.

He was a perfect fielder, committing zero errors for a 1.000 fielding percentage.

Statistically, he is most related to Jared Fernandez as of 2006 using the similarity scores method. He spent four seasons as teammates with Kubiak, Roof, Mike Hershberger and Lew Krausse Jr. - longer than any other teammates - according to incomplete records at The Baseball Cube.

He wore two numbers in his major league career: 28 with the Athletics and 49 with the Brewers.

At last check, he lived in Palm Beach, FL.