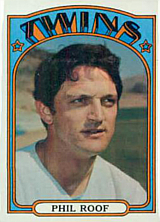 Phil Roof hit two home runs on May 30, 1972 as a member of the Minnesota Twins against the Kansas City Royals. He hit the first off Paul Splittorff and the second off Bruce Dal Canton. The Twins won the game 3-2. His playing career went from 1961 to 1977, starting with the Milwaukee Braves and ending with the Toronto Blue Jays in their inaugural season. In between, he played for six other teams, with his longest stints coming with the Atheltics in both Kansas City and Oakland and with the Twins.

He is a member of the "all-construction" team, along with Frank House and Brick Smith.