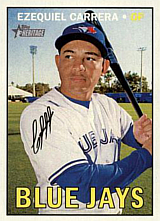 On December 10, 2008, Carrera was traded, along with Endy Chavez, Aaron Heilman, Jason Vargas, Mike Carp and Maikel Cleto, to the Seattle Mariners for J.J. Putz, Sean Green and Jeremy Reed. He put together a great summer with the West Tenn Diamond Jaxx, hitting .317/.441/.416 with 27 steals in 40 tries but missed two months due to an ankle sprain and a thumb sprain. He still led Mariners farmhands in OBP and paced the Southern League in both average (.021 over Desmond Jennings) and OBP, named to the All-Star outfield for the SL. He was third in all of the affiliated minors in OBP behind John Bowker and Jaff Decker. That winter, he hit .269 with 14 steals for the Magallanes Navigators of the Venezuelan League. Carrera began 2010 with the Tacoma Rainiers and hit .268/.339/.315 in his first 64 games at AAA. He was then traded, with Juan Diaz, to the Cleveland Indians for Russell Branyan.

Ezequiel made his major league debut with the Indians in May 2011, hitting .243 in 68 games with no homers and 14 RBI but 27 runs scored. He followed in 2012 by hitting .272 in 48 games with 2 homers and 11 RBI. In 2013, he failed to make the Indians Opening Day roster and was placed on waivers at the end of spring training, at which point he was claimed by the Philadelphia Phillies. He spent the first month of the season with the Phils, going 1-for-14 (.077) before being placed on waivers again. The Indians reeled him back in and he went 2-for-4 in 2 games in early May but was sent down to the AAA Columbus Clippers, where he hit .248 in 105 games. Carrera moved to the Detroit Tigers for the 2014 season, hitting 261 in 45 games at the major league level and .307 in 97 games for the Toledo Mud Hens. He played in the postseason for the first time that year, going 0-for-1 with a walk and a stolen base in the Tigers' loss to the Baltimore Orioles in the ALDS.

He seemed to be settling into the life of a AAAA player, doing well in AAA but only making sporadic appearances in the majors. Then, he caught a big break in 2015. He signed with the Toronto Blue Jays and, after spending April with the Buffalo Bisons, stuck with the big club for almost all of the rest of the season and most of the next two as well. This fortuitously coincided with the Blue Jays breaking a 20-year postseason drought, and he was an important cog in the team that reached the ALCS in both 2015 and 2016. That first year, he hit .273 in 91 games with 3 homers and 26 RBI, but had only 2 at bats in the postseason. In 2016, he hit .248 in 110 games with 47 runs scored, 6 homers and 23 RBI. This time, he saw a lot more action in the postseason as he went 2-for-4 in the Wild Card Game against the Orioles, 4-for-14 with a homer against the Texas Rangers in the ALDS, and 4 for 17 against his former team, the Indians, in the ALCS. He followed that with his busiest season in 2017 when he played 131 games as the quasi-regular left fielder for the Jays. He hit .282 with 8 homers and 20 RBI while scoring 38 runs. For the first time of his career, he managed an OPS+ of 100, making him a valuable bac-up even if his offense was still on the light side for a starting outfielder.

Based off his past few seasons, it was expected Carrera had a part to play in 2018 and went to spring training with the Jays. On February 26, he was designated for assignment when the Jays signed Korean reliever Seung-hwan Oh as a free agent. He was officially released on March 11th, but two days later managed to land a job with the Atlanta Braves, where he even had an opportunity to compete for a starting job in the outfield. He spent the season in the minor leagues for the Braves and New York Mets, then jetset between the Los Angeles Dodgers organization, the Rockland Boulders of the Can-Am League and the Long Island Ducks of the Atlantic League in 2019.