Note: This page is for 2010s OF/1B Eric Campbell; for others with the same name, click here. 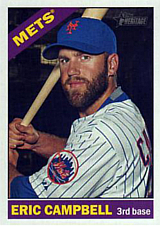 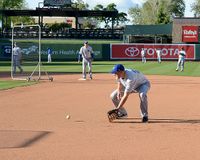 Eric Campbell played three seasons as a corner infielder with the New York Mets, then returned to the major leagues with the Oakland Athletics in 2021 after not playing at that level since 2016.

After attending spring training with the Mets in 2014, he began the season back in Triple A, where he hit an excellent .353/.442/.525 with 39 runs and 24 RBI in 33 games for Las Vegas. He was leading the 2014 PCL in runs scored when he was called up to the Big Apple in early May as a more versatile bench option when Josh Satin was demoted. He made his big league debut on May 10th as a pinch hitter for first baseman Lucas Duda in the 6th inning of a 5-4 loss to the Philadelphia Phillies. Batting against Jake Diekman with the bases loaded, he hit a sacrifice fly to right fielder Marlon Byrd, driving in Daniel Murphy to give the Mets a 4-3 lead. He stayed in the game playing first base, but the Phillies were able to score two late runs, while he struck out against Mike Adams in the 8th. Eric saw his most action in 2014 at the big league level, hitting .262/.322/.358 in 85 games. With the captain, David Wright, felled by injuries early in 2015, Campbell was pressed into third base duty, but his bat was not up to the task. In 71 games, he hit only .197/.312/.295. Injuries bought him some more action in 2016, but again he scuffled to a miserable .173/.284/.227 line in 40 games. He saw his last action in that year's Wild Card Game, manning first base along with James Loney due to an injury to Lucas Duda. He struck out against Madison Bumgarner in his final big league at bat as the San Francisco Giants won the game.

He played for the Hanshin Tigers in 2017, then saw time in the Miami Marlins and Oakland Athletics organizations.