Robert F. Kennedy Memorial Stadium was home to the expansion Washington Senators for all but one of their seasons in Washington, DC. Built in 1961 by the federal government on reclaimed swamp land on the Anacostia River near the D.C. Armory, the park's design had to be approved by Washington's Fine Arts Commission. The Commission ruled out light towers for esthetic reasons, so the park's lights were installed on the rim of the roof. The stadium is a circular, double-decked structure with a curved, dipping roof and symmetrical outfield dimensions.

RFK was the first of the "cookie-cutter" parks built through the 1960s and 1970s that were perfectly round and comprised featurelessly symetrical outfields (Veterans Stadium, Shea Stadium, Riverfront Stadium, etc. were others). There are no lower deck seats in the outfield, and bullpens were located behind a screen in center field. A huge 375 foot by 35 foot scoreboard costing $400,000, was located at ground level in right center. There is very little wind here, so the park has always been hot for day games. Seats feature unobstructed views of the field, and the dugouts are air-conditioned and have overhead lights. RFK Stadium's main entrance on its west side features the Clark Calvin Griffith Monument to the left and the George Preston Marshall Monument to the right. Surrounding the stadium is parking for 12,500 cars. It is directly accessible by metro, with the station entrance being located a block away from the stadium's main gate.

The Senators began play in D.C. Stadium, as it was originally named, in 1962, and during the course of their first season, left and left center field sank six feet as the result of leveling following construction. The April 1968 assassination of Martin Luther King, Jr. set off night riots in Washington, delaying the Senators' 1968 opener and causing several night games to be moved to afternoons. After the assassination later that year of Robert F. Kennedy, the stadium was renamed in his honor.

The Senators played poorly here and never drew over a million fans (though pricing the cheapest ticket at $3.50 at a time when Baltimore's was 50 cents didn't help). However, Frank Howard did lead the American League in home runs in 1968 and 1970 while playing here, and many centerfield seats were painted to mark the location of his homers. In 1971, Senators owner Bob Short announced he was moving the club to Texas for the next season, and during the team's final game here on September 30th, with two outs in the ninth inning, angry fans stormed the field. They ripped up the bases and turf, destroyed the mound, and refused to leave the field, resulting of the forfeit of the Senators' final major league game. 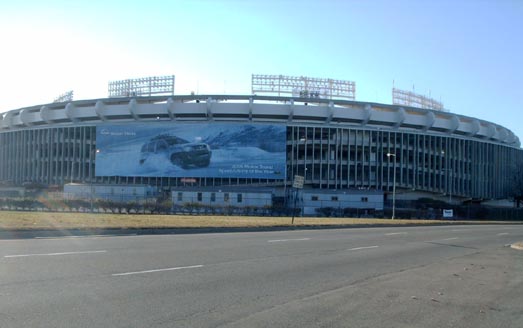 After the Senators left, RFK Stadium was home to the NFL's Washington Redskins and the site of several major league exhibition games. A 24 foot high Blue Monster was installed in 1987, since the football stands in deep left that formerly telescoped under the stands down the left field line for the baseball configuration were immobile after having not been moved in 16 years, leaving the left field wall's distance at only 260 feet.

In 2005, the Montreal Expos relocated to Washington and became the Washington Nationals. They called RFK Stadium home while waiting for a new stadium to be built, playing there for three seasons. The new stadium, Nationals Park, opened March 30, 2008 with the Nationals facing Atlanta.