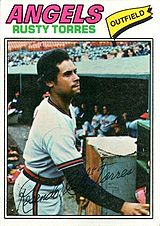 The Forrest Gump of baseball forfeits, Rusty Torres "played" in three of the five games of the post-expansion era that resulted in a forfeit.

He was a September call-up by the New York Yankees in 1971, and was playing in only his ninth major league game on September 30th of that year at RFK Stadium against the Washington Senators, the last home game of the season for a team that had recently announced it would move to the Dallas-Fort Worth area the following season. It was Torres' 23rd birthday. With the Yankees at bat in the top of the 9th, losing 7-5, with two outs, no one on base and Horace Clarke at bat, Torres was on deck when fans stormed the field to express their anger with the team's plans to move, and to hunt for souvenirs. When umpires couldn't restore order, the game was forfeited to the Yankees. Torres' 1st inning home run, the second of his young career, still went in the record books.

He was traded by the Yankees to the Cleveland Indians before the 1973 season in the deal that brought Graig Nettles to the Yankees. On June 4, 1974, Torres' Indians had a 10-cent beer night for their game against the Texas Rangers. In the bottom of the 9th, the Indians were losing 5-4 but had a runner on when Torres pinch hit for catcher Dave Duncan and got a single, advancing teammate Ed Crosby to second. The Indians' third straight pinch hit single by Alan Ashby sent Crosby to third and Torres to second, and Crosby scored on a sacrifice fly by John Lowenstein. Thus Torres was the potential winning run at second with Jack Brohamer coming up when the drunken fans essentially rioted. Rangers manager Billy Martin (just the manager you want on your side in essentially the world's biggest bar brawl) pulled his team off the field and the game was forfeited in favor of Texas.

After brief stops with the Texas Rangers and the California Angels, Torres was traded to the Chicago White Sox in 1978. On August 4, 1979, he played in the first game of a twinight doubleheader against the Detroit Tigers. Between games, the White Sox had a "Disco Demolition Night" promotion where a Chicago rock DJ blew up a stack of disco records that had been brought to the park by fans who got reduced admission by turning in their records. But the fans stormed the field and the umpires, after consulting with the league office, at first postponed the game, in which Torres was due to play. The next day the league ruled the game a forfeit.

The only other two forfeits in the 50 years following 1955 were a September 15, 1977 game in which Earl Weaver pulled the Baltimore Orioles off the field in a dispute with the umpires over the supposed threat posed to his players by a tarp in the Toronto Blue Jays bullpen, and an August 10, 1995 Los Angeles Dodgers game when fans pelted the field of a game against the St. Louis Cardinals with baseballs they had received as a promotion.