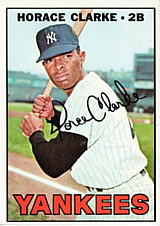 "I know I got a lot of criticism for playing Horace Clarke as much as I did, but he was a lot better ballplayer than anyone gave him credit for. He did a lot of things good but nothing great, and that was his problem... besides, I didn't have anyone else." - Ralph Houk

The late 1960s and early 1970s are often referred to derisively as the Horace Clarke Era for the New York Yankees. Horace played through the eclipse of baseball's greatest franchise. He arrived in 1965, one year after the Yanks' World Series loss to the St. Louis Cardinals, ending a dynastic period that began with the hiring of Casey Stengel. He left in 1974, two seasons before they returned to the World Series and began a new stretch of success. Ultimately, the light-hitting second baseman became the scapegoat for a low ebb in team history.

Horace was the fifth man from the Virgin Islands to play in Major League Baseball. Primarily a leadoff hitter, he batted .256/.308/.313 in a deadball era, leading the American League in at bats twice, two seasons in which he scored over 80 runs. His on-base percentage was surprisingly low for a lead-off aman, but in his defense, the Yankees in those days had few good options to lead off. Roy White would have been an excellent fit at the top of the lineup, but the roster was short of power, so manager Ralph Houk used White in the middle of the order. In 1968, the "Year of the Pitcher", Clarke had a staggering nine extra-base hits in 579 at-bats. He was at best a "pesky" hitter: in 1970, Horace broke up three no-hitters in the 9th inning, by Joe Niekro, Sonny Siebert, and Jim Rooker. He had speed and good range (although he was criticized for holding the ball on double plays). It was Clarke who was to have batted with 2 out in the top of the 9th and the Yanks trailing the Washington Senators, 7-5, when the fans at RFK Stadium stormed the field and caused the forfeiture of the final game the expansion Senators played in Washington, DC. He finished his final season in unfamiliar territory, being sold to the San Diego Padres at the end of May 1974.

After he retired, he became a government-paid instructor in the local baseball programs on St. Croix, partnering with Elmo Plaskett. Their star pupils were Jerry Browne and Midre Cummings. Horace's sons, Jeff Clarke and Jason Clarke, both played in the minors.