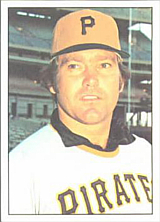 Jim Rooker pitched 13 seasons in the majors, mostly with the Pittsburgh Pirates, and won 103 games.

Rooker earned a cup of coffee in the majors with the Tigers in 1968, appearing in 2 games. Following the season, he was sent to the New York Yankees as the player to be named later in an earlier trade for John Wyatt, but less than two weeks later, he was selected by the Kansas City Royals in the expansion draft. He pitched well for the Royals in his rookie year of 1969, recording a 3.75 ERA in 28 outings, but only posted a 4-16 record. He also performed well at the plate that summer, hitting .281 with 4 home runs, 2 of which came in the same game, on July 7th against the Minnesota Twins. In 1970, he won 10 games and drove in 5 runs in a single game, but his numbers fell off and he split the next two seasons between Kansas City and the Triple A Omaha Royals.

Following the 1972 season, Rooker was traded to the Pirates for Gene Garber. He won at least ten games in each of his first five years in Pittsburgh. In 1974, he was 15-11, 2.78 and in 1976 finished at 15-8 with 3.35 ERA. In the 1979 World Series, he appeared in two games, pitching out of the bullpen in Game 1 after Bruce Kison was chased after retiring only one batter, and earning a start in Game 5, with the Pirates facing elimination, even though he had only gone 4-7, 4.60 during the regular season. He only gave up 1 run on 3 hits in 5 innings, and the bullpen collected the ensuing 7-1 win.

After being released by the Pirates after the 1980 campaign, during which he only pitched 4 times before being shut down by an injury, Rooker was one of the team's broadcasters from 1981 to 1993. In 1989, when the team was winning 10-0 in the 1st inning against the Philadelphia Phillies, he said he would walk home if the Pirates lost. The Phillies came back to win 15-11. He didn't walk home following the game, but after the season he did walk from Philadelphia to Pittsburgh and earned $81,000 in charity for a children's hospital in the process.

After a brief broadcasting run at ESPN, Rooker owns a tavern, Rook's East Side Saloon, in Ambridge, Pennsylvania. He wrote a series of children's books beginning in 2009. As a Democrat, he ran once for state representative and once for Congress but lost both races.