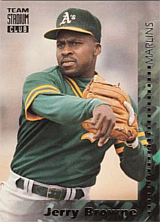 Jerry Browne was a solid hitter and fielder during a ten-year big league career.

Browne signed as a free agent by the Texas Rangers and scout Orlando Gomez. Nicknamed "The Governor" after California's Jerry Brown, Jerry was a diminutive but athletic second baseman signed as a teenager out of the Virgin Islands. He showed good plate discipline in the lower minors, being a Carolina League All-Star in 1985, where he hit .267 with 69 runs scored and 24 steals in 122 games. He moved directly from Double A to the Rangers' starting lineup in 1987. He hit .303 with 82 runs scored, 39 stolen bases and 57 RBI in 128 games with the Tulsa Drillers in 1986 and also led Texas League second basemen in fielding with a .984 mark. The Rangers were in the midst of a wholesale youth movement, a trend that manager Bobby Valentine quickly repented of. As an example to his peers, Browne was demoted to the Triple A Oklahoma City 89ers in mid-season 1988, along with fellow youngsters Oddibe McDowell and Bobby Witt. He hit .252 with 5 home runs, 34 RBI and 14 steals in 76 games while with Oklahoma City.

Soon after, the Rangers reversed their youth movement, shipping Browne with McDowell and Pete O'Brien to the Cleveland Indians for veteran Julio Franco after the 1988 season. A fast, switch-hitting glove man, a good bunter who was unafraid of taking walks, Browne seemed like the answer to the Indians' second base needs - and would later seem to be the answer for the Oakland Athletics and the Florida Marlins. He was a useful utility player, but inconsistent hitting and his almost total lack of power in an increasingly slugger-dominated game led to the end of his big league career before he turned 30. He did not accept an assignment to Triple A after nearly winning a roster spot with the New York Mets in 1996, leaving him jobless. A comeback attempt with the Rangers in 1997 fell short.

He did some minor league coaching beginning in 2002.