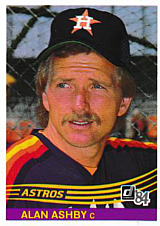 Catcher Alan Ashby played seventeen years in the majors, mostly with the Houston Astros, and caught three no-hitters during the course of his career.

Ashby grew up in the Los Angeles as a big fan of the Dodgers, especially Sandy Koufax. A natural left-handed hitter, he was inspired by the Dodgers' all-switch-hitting infield of the 1960s to become a switch-hitter himself. He attended San Pedro High School, from which he was selected by the Cleveland Indians in the third round of the 1969 amateur draft. He attended Los Angeles Harbor Community College during offseasons while playing in the minors and reached the bigs with the Indians in 1973, replacing an injured Dave Duncan. In his first career at-bat on July 3rd, he singled off Mike Strahler of the Detroit Tigers. He spent most of the 1974 season in the minors but became Cleveland's regular catcher in the second half of the 1975 season. He was a defense-first receiver in those days, as he only hit .224 in 1975 and .239 in 1976, when he shared catching duties with Ray Fosse.

Following the 1976 season, on November 5th, he became the first player acquired via trade by the expansion Toronto Blue Jays when he was dealt for Al Fitzmorris. The Blue Jays had a surplus of catchers, as they planned on having Rick Cerone as their starter with veteran Phil Roof backing him up and young Ernie Whitt in AAA. Ashby was the odd man out until Cerone broke a thumb early in the 1977 season, opening the starting job for him. He was a regular behind the plate in the Jays' inaugural campaign, but hit just .210 with 2 home runs, and Cerone took over starting reins when he returned to action in August. Alan hit a lot better in 1978, when he shared catching duties with Cerone, hitting .261 with 9 homers.

Following the 1978 season, Ashby was traded to the Astros for three players, pitcher Mark Lemongello, outfielder J.J. Cannon and infielder Pedro Hernandez. He was Houston's regular behind the plate for most of the next decade, during which time he caught three no-hitters: one by Ken Forsch, one by Nolan Ryan, and a third by Mike Scott (which was also the 1986 NL West division-clinching win). He had his best year at the plate in 1987, when he posted career-highs in batting average (.288), home runs (14), and runs batted in (63). Forsch's no-hitter came in Ashby's second game with Houston, April 7, 1979 and was the harbinger of the team's best season since their creation in 1962. Ashby received a lot of praise for the dramatic improvement in Houston's pitching that year, and in 1980, the team reached the postseason for the first time in their history, losing a tightly contested five game NLCS to the Philadelphia Phillies. Ashby played again in the postseason in 1981 and 1986, but the Astros were defeated in close series each of those times as well. He hit a walk-off home run off Dave Stewart of the Los Angeles Dodgers in Game 1 of the 1981 Division Series in what was the offensive highlight of his career. Another highlight came on September 27, 1982, when he became the first player in Astros history to homer from both sides of the plate in one game. The Astros were not an easy team to catch in those years, what with the explosive but often wild fastballs of J.R. Richard, the knuckleball of Joe Niekro and the heat served by Nolan Ryan, who joined the team in 1980. Ashby remained the starter until 1989, when Craig Biggio, who made his big league debut in 1988 while Ashby was sidelined by an injury, took over as the backstop, and Ashby was given his unconditional release in May after hitting only .164 in 22 games. He caught on with the Fort Myers Sun Sox of the Senior Professional Baseball Association in 1989 and hit .241 in 19 games with the club.

After his playing days, Ashby was sports anchor at a Houston television station from 1990 to 1992. He returned to the diamond as manager of the Rio Grande Valley White Wings in the Texas-Louisiana League in 1994 and 1995 and managed the Kissimmee Cobras in 1996. He was the Astros bullpen coach in 1997, and from 1998 to 2005, he was a radio broadcaster for the team. In 2007, he became a radio play-by-play announcer and analyst for the Blue Jays, working with Jerry Howarth, keeping the job until 2013, when he returned to call Astro games.

Ashby earned the nickname "Buns" from the ladies employed in the secretarial pool in the Blue Jays front office in the 1970s, as they admired his rear. Bob McCown also worked with the Jays at that time and kept the name alive. The nickname followed Ashby to Houston after he left the Jays.