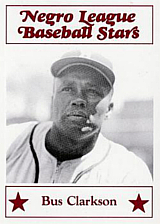 James Buster Clarkson enjoyed a long career spread among the Negro Leagues and the Mexican League with a big league cameo for the Boston Braves in 1952. He is listed here and in Total Baseball as "Buzz Clarkson", but all Negro League, Mexican League and most minor league sources (except one) list him as Bus Clarkson, more fitting given his middle name. His date of birth is on March 13, either in 1915 as listed here or in 1918 according to some sources.

Clarkson's first season as a regular came with the Toledo Crawfords of the Negro American League in 1936. He hit .276, one of the better marks on a poor team and pretty decent for a 21-year old second baseman. A year later he became a star, moving to play shortstop for the Newark Eagles, a position usually filled by a Hall of Famer like Willie Wells or Monte Irvin. Clarkson hit .343, third on the team behind Irvin and Lenny Pearson, with 9 homers tying him for Pearson for 2nd in the Negro National League, 2 behind Hall of Famer Buck Leonard. Legend has it that Clarkson was once walked intentionally with the bases loaded in a Negro League game due to his power, but verification of this cannot be found. Clarkson added another homer for Nuevo Laredo of the Mexican League, going 27 for 80 (.338) in limited time in Mexico. In 1941, Clarkson returned to the Mexican League, hitting .334. More impressively, he again finished second in his league in homers, bashing 19, 14 behind Josh Gibson who set the Mexican record that year. Clarkson slugged .598 and posted an OBP around .414 as one of the more dominant threats in a league that featured 5 future Hall of Fame hitters. Clarkson returned to the Negro Leagues in 1942 and hit .328 as the shortstop for the Philadelphia Stars, just missing the top 5 in average. He then missed three years of his prime serving his country in World War II.

When Clarkson returned in 1946, he again split a year between Mexico and the Negro Leagues. For the Philadelphia Stars, he hit .411 as the team's main third baseman but did not qualify to place among the league leaders in average (only teammate Frank Austin hit higher, at .454). For the Veracruz Blues, Clarkson hit .298/.410/.580 in 37 games, homering 9 times. Compared to the major leaguers who played in Mexico in 1946 and 1947, Clarkson more than held his own, outperforming many of the MLB hitters. Clarkson spent a second full year in Mexico in 1947. Again with Veracruz, he hit .303/.423/.518 with 17 homers, 5 off the league lead, while stealing 20 bases and drawing 79 walks as a multi-purpose threat. The winter was rough for Clarkson, only hitting .198 in the Cuban Independent League. With the integration of baseball, the 30-year old Clarkson was not a hot commodity compared to young up-and-comers. He signed with the independent Provincial League of Canada in 1948 and hit .399 with a league-leading 28 home runs. In 1949, he returned to the dying Negro Leagues and hit .313 for Philadelphia. In the East-West All-Star Game that season, Clarkson hit 4th and played right field; he had previously made the game in 1940 as a shortstop.

In 1950, Clarkson finished his Negro League career and signed with the Boston Braves, who assigned him to the Milwaukee Brewers in the American Association. Clarkson hit .302/.384/.468 in his first taste of AAA while manning third base primarily. He outhit future Braves shortstop Johnny Logan, among others. In 1951, Clarkson played his second year for Milwaukee, hitting .343/~.430/.466 .343 and did a good job defensively at short. The Brewers won the AA pennant, the playoffs and then the Junior World Series. Logan was pushed to the bench, hitting .249 and slugging .365 as a backup to Clarkson.

1952 witnessed Clarkson finally make it to the majors, at the ripe old age of 37 (according to baseball-reference, 34 according to the site of the Negro League Baseball Players Association and the Mexican League Encyclopedia, which list his birthday). The Braves gave him all of 25 at-bats to show his stuff and, when he only cracked 5 singles, they decided that he had had his shot. Clarkson may have been able to contributed to the Braves, even at his advanced age, with the club falling short to New York's Dodgers and Giants. He was returned to Milwaukee and continued to dominate at AAA. Playing for one of the greatest minor league teams ever, he hit .318/.452/.541, again far better than Logan (.301/.378/.507) - Gene Mauch also was part of the shortstop parade for the Brewers. Milwaukee won 101 games, capping 51 years in the AA before joining the majors in 1953. No AA team ever won 100 games after that.

Clarkson hit 189 homers in his minor league career, despite spending 3-plus years in the service and at least parts of 8 seasons in the Negro Leagues. He also starred in winter ball, hitting .467 as player-manager of the Cangrejeros de Santurce when they won the 1953 Caribbean Series and hitting .313 when they won the 1955 Caribbean Series. He was posthumously named to the Caribbean Baseball Hall of Fame in 2020.