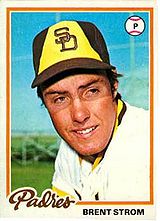 He earned a call up to the majors in 1972 after doing well with Tidewater. With the Tides, he went 6-7 with a 3.30 ERA in 142 innings of work. He made his big league debut on July 31st, pitching well against the Montreal Expos. In his first game, he pitched 6 2/3 innings, allowing only 2 runs on 2 hits and 4 walks, striking out 7 in the process. Although he pitched well, he did not get the decision. The rest of his season didn't turn out too well - overall, he appeared in 11 games, starting 5 of them. He went 0-3 with a 6.82 ERA.

He did not play in the majors in 1974, but on June 21st of that year he was sent (with Terry Ley) to the San Diego Padres to complete an earlier trade that occurred on June 15th. The Indians received Steve Arlin in return.

Although he did not play in the majors after the 1977 season, he remained active in the minors for a few more years. He did not play ball at all in 1978 after being released by the Padres in March. However, he was signed by the Houston Astros in March of 1979. In his first year in their system, he pitched for the Daytona Beach Astros, the Columbus Astros and Charleston Charlies. He went a combined 10-7 with a 3.63 ERA in 139 innings of work. In 1980, he pitched for the Tucson Toros, where he was 11-6 with a 4.37 ERA in 136 innings. He played his final year in 1981 with the Albuquerque Dukes, in the Los Angeles Dodgers organization.

Statistically, he is most similar to Ross Baumgarten, according to the Similarity Scores.

In 2014, he returned to the major leagues as pitching coach for the Astros, staying until the end of the 2021 season. His stay included one World Championship in 2017 and two other appearances in the World Series, in 2019 and 2021. He was widely praised for his work in turning the Astros' staff into one the majors' best. Many thought he would retire after leaving the Astros, but instead he joined the Arizona Diamondbacks to be their new pitching coach in 2022.