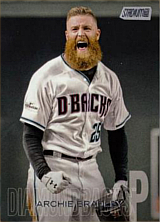 "I don't believe in special powers but it's kind of funny that as soon as I grew a beard I seemed to pitch better. I think it's more to do with having to only pitch 1-2 innings and being able to go 100% versus trying to save my arm to last 6-7 innings as a starter." - Archie Bradley, on his newfound success and beard in 2017

Archie Bradley was a top 10 draft pick in 2011. With his big bushy beard, he became a strong reliever out in the desert beginning in 2017.

Bradley was 12-1 with 133 strikeouts to 11 walks in 71 1/3 innings as a high school senior, with a minuscule 0.29 ERA. His fastball hit 100 mph on the radar gun and he also was rated as having a solid curveball. He had a football commitment to play quarterback with the Oklahoma Sooners when the Arizona Diamondbacks took him 7th overall in the 2011 amateur draft. He was the second high school pitcher taken, following his friend Dylan Bundy. He was also the second Arizona pick - they had taken Trevor Bauer at #3 but had an extra pick because they had not signed Barret Loux in 2010. He explained that while the lure of becoming a huge star at Oklahoma was on his mind, he had chosen to concentrate on baseball because of "how much faster your body wears down in football."

Bradley was signed by scout Kyle Denney and made his pro debut in 2011 with the Missoula Osprey, pitching only two games. He was assigned to the South Bend Silver Hawks of the Midwest League in 2012 and had a great season, going 12-6, 3.84 in 27 starts, pitching 136 innings during which he allowed only 87 hits and struck out 152. His one weakness was control, with 84 walks issued. In 2013, he moved up to the Visalia Rawhide of the California League, but earned another promotion after only 5 starts, in which he was 2-0, 1.26. With the AA Mobile Bay Bears, he was the Southern League pitcher of the year, putting up a record of 12-5, 1.97 in 25 starts. Archie showed significant improvement in his control, bringing his walks down to 59 in 123 1/3 innings, while still striking out plenty of opponents - 119 - and allowing only 93 hits.

Now considered a top pitching prospect, Bradley was in spring training with the big league D-Backs in 2014, with a chance to make the team's Opening Day starting rotation. When Patrick Corbin went down with a season-ending elbow injury in the spring, that made Bradley an even more likely candidate to break camp with the team. He accompanied the D-Backs to Sydney, Australia for their opening series against the Los Angeles Dodgers and was given the opportunity to start their tune-up game against the Australian national team on March 21st in what was portrayed as an audition for a starting slot. It did not go well, as he gave up 3 runs on 6 hits and 3 walks in 3 2/3 innings and was charged with his team's 5-0 loss. He was on the D-Backs' roster for the team's two-game opening series in Sydney, but obviously did not play given his start a couple of days earlier. He was sent to the minors before the team resumed the regular season a week later, before having had a chance to make his debut and, in fact, did not make his big league debut at all that year as he struggled. Bothered by injuries, he made only 18 starts, including one on a rehabilitation assignment in the Arizona League. He was 2-3, 4.12 for Mobile and 1-4, 5.18 in 5 starts for the Reno Aces in his first taste of AAA.

Bradley headed to spring training in 2015 focused on turning the page and did just that as he earned a spot in the D-Backs starting rotation at the start of the year. This was confirmed April 2nd when Arizona traded veteran Trevor Cahill to the Atlanta Braves to open a spot for him. He finally made his debut on April 11th, facing the Los Angeles Dodgers and defending Cy Young Award winner Clayton Kershaw, and came out on top of the tough assignment, 6-0, giving up only 2 hits in 6 innings. His second start, on April 16th, came against another tough customer, Madison Bumgarner of the San Francisco Giants, reigning World Series MVP. He almost pulled off a second straight win, as he left with a 4-1 lead and two outs in the 7th, but reliever Oliver Perez was greeted with a two-run homer by Brandon Crawford. The Giants eventually tied the score when Addison Reed blew a save opportunity in the 9th, but in the end the D-Backs won the game, 7-6, in 10 innings. Archie had to leave a game against the Colorado Rockies on April 28th when he was hit in the face by a line drive off the bat of Carlos Gonzalez in the 2nd inning. He lay on his back on the mound for two minutes in eerie silence as trainers attended to him but was able to walk away under his own power and ended up with a badly swollen right cheek but no serious physical injury. He was able to return to the mound on May 16th. The injury left some psychological scars, as he became obsessed with the thought that he could be hit again by a batted ball. As he explains, the fear hit its paroxysm on May 21st, when he faced the Miami Marlins' Giancarlo Stanton and the fear really struck him: "I was worried about him hitting the ball at me instead of trying to get him out." Contributing to the problem was the fact that he tried coming back to a major league mound too quickly, to prove to himself that he was over the incident, when he would have been better off taking a bit more time and perhaps making a rehab start or two before going back to facing major league hitters. He made a couple more appearances, but things were not right, and on June 1st, a shoulder problem shelved him the remainder of the season, finishing at 2-3, 5.80 in 8 starts.

Following his disappointing first campaign, he worked with Diamondbacks sports psychologist Peter Crone and went on an intensive training regimen to get himself back in top shape for the opening of spring training in 2016. He began the year back in Triple A and finally stuck in the bigs with a call up at the end of May. In 26 games, all starts, he finished 8-9, 5.02 with a 67/143 BB/K ratio in 141 2/3 innings. Bradley lost the final rotation spot to Patrick Corbin in camp in 2017 but thrived in his new role as set-up man, posting a 1.73 ERA and 1 save in 73 innings. In the postseason, he became the first relief pitcher in history to triple in a postseason game, connecting with a two-run three-bagger off Pat Neshek of the Colorado Rockies in an eventual 11-8 Diamondbacks victory in the Wild Card Game. He later made 2 appearances in the NLDS, totaling 4 2/3 scoreless innings, as Arizona bowed out to the Los Angeles Dodgers. While not as impressive ERA-wise, he continued to succeed in his set-up role, making a combined 142 appearances between 2018 and 2019 with an ERA around 3.60.

The Diamondbacks thought they had a chance to be competitive during the shortened 2020 season, but they lost 9 of their last 10 games before the August 31st trading deadline to fall well out of contention, and decided to be sellers. Archie was among a number of veteran players to be traded that day, heading to the Cincinnati Reds in return for Stuart Fairchild and Josh VanMeter. At the time of the trade, he was 1-0, 4.22 in 10 games.