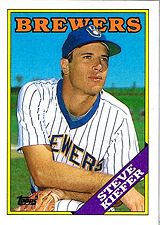 The brother of Mark Kiefer and father of Cory Kiefer, Steve Kiefer showed good power throughout his minor league career, hitting 141 homers on the farm, but poor contact hitting limited his productivity in the majors.

Kiefer was traded with Mike Fulmer, Pete Kendrick and Charlie O'Brien to the Milwaukee Brewers for Moose Haas in March of 1986. He hit .268/~.336/.453 for the Vancouver Canadians but was just 0 for 6 with the Brewers.

Steve had his best season in 1987. For the Denver Bears, he hit .330/~.392/.668. He was the American Association All-Star third baseman. He finished sixth in the league in average, led in slugging and was second with 31 homers, one behind teammate and leader Brad Komminsk. With the Brewers, he batted .202/.257/.394 with 5 HR and 17 RBI in 99 AB. That year, he hit four grand slams for Denver and one against Scott McGregor of the Baltimore Orioles in the American League. Despite barely eclipsing the Mendoza Line, he had a 7-game hitting streak with the Brewers.

He struggled as a utility infielder for Denver in 1988 (.214/~.285/.408) though he was 3 for 10 with two walks and a home run for the Brewers. With Gary Sheffield coming up as a top power-hitting shortstop and Dale Sveum and Paul Molitor around, options were limited.

Kiefer moved to the New York Yankees as a free agent in 1989. He hit .276/~.331/.455 for the Columbus Clippers and was 1 for 8 with five strikeouts for the Yankees to conclude his major league career.