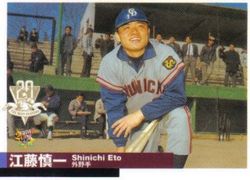 First baseman Shinichi Etoh (also transliterated as Shinichi Eto) came up with the Chunichi Dragons in 1959 and went on to hit 367 home runs in his career. Etoh was an 11-time All-Star and three-time batting titlist. He was the only 20th Century player to have won a batting title in both the Central League and Pacific League. He is the brother of Shozo Etoh. He battled alcoholism throughout his career. He said his proudest accomplishment in baseball was twice denying Sadaharu Oh a Triple Crown.

Etoh tried out for the industrial league club Nittetsu Futase out of high school and manager Wataru Nonin signed the youngster. He sent over 70% of his limited earnings home to his family to help them out. After two years, he tried out for the Chunichi Dragons, claiming he could play first base even though his experience had all been at catcher. As Chunichi had just lost Michio Nishizawa to retirement, Etoh was given the job and did well, hitting .281/.319/.422 with 15 home runs and making his first All-Star team. He held the franchise record for hits by a rookie for 58 years before Yota Kyoda topped it.

Etoh produced at a .288/.365/.454 clip with 23 home runs and 84 runs in 1962. He was 4th in the Central League in average and made another All-Star team. He improved to a batting line of .290/.370/.488 in 1963 with 25 home runs and was hit by pitch a league-high 7 times. He was an All-Star and Best Nine pick. In one game that year, he hit two home runs to give Chunichi a 6-4 lead over the Yomiuri Giants before Oh homered in the top of the sixth with a man aboard to tie it. After that, it began to rain but Etoh refused to abandon his post in left field for 20 minutes, fearing the game would be called a tie (as it would be). NHK Broadcasting played the scene to the audience across Japan.

In 1964, the 26-year-old batted .323/.387/.502 with 21 home runs. He won the Central League batting title by three points over Sadaharu Oh, who took the other two legs of the Triple Crown. He was chosen as a Best Nine and All-Star. The next year, Etoh hit .336/.440/.591 with 29 circuit clouts. He again beat out Oh for a batting championship and again denied him a Triple Crown by doing so. Etoh continued his run of Best Nine and All-Star selections. He completed a run of 809 consecutive games played that season.

Etoh batted .321/.397/.585 with 26 home runs and 91 RBI in 1966 to finish 4th in average, third in OBP, third in slugging and third in RBI (trailing only Oh and Shigeo Nagashima in the latter three categories). He tied Nagashima for second in homers, behind Oh. He once again was an All-Star and Best Nine.

Etoh made his ninth straight All-Star squad in 1969, completing the decade with a .280/.356/.507 batting line and 25 home runs. He ran into conflict with manager Shigeru Mizuhara's harsh style. 2B Morimichi Takagi had let a grounder go through his legs; in the clubhouse later, Mizuhara told Takagi his eyesight was going and that a schoolgirl could have made the play. Etoh confronted Mizuhara over his harsh language and Mizuhara refused to relent. Etoh retired that off-season and Chunichi drafted Kenichi Yazawa to take his place. Etoh came out of retirement but Chunichi would not take him back.

Etoh was sent to the Lotte Orions in June of 1970 for Kazuto Kawaguchi. He hit .288/.409/.541 in 72 games for Lotte that year. He was 2 for 8 with two walks and a home run in the 1970 Japan Series. In 1971, Etoh batted .337/.414/.555 with 25 home runs and 91 RBI to win the Pacific League title by 16 points over Hideji Kato. No one had ever won batting titles in both top Japanese leagues previously and it would be 40 years before another player (Seiichi Uchikawa) completed the feat. He also led the league in OBP. He made the PL All-Star team, his 11th and final All-Star pick. Etoh was traded to the Taiyo Whales for Osamu Nomura after the 1971 season.

Etoh hit .228/.275/.351 only in 1975 as the team went 58-62-10, finishing third in the Pacific League. He became the 9th player in NPB history to reach 2,000 hits, joining the meikyukai. Etoh was let go when the Lions were working on a deal with Leo Durocher to be their next manager (the deal fell through due to Durocher's health).

After retiring from playing, Etoh began a baseball school in Shizuoka Prefecture and managed the Yaohan supermarket's industrial league team. In 2001, Etoh ran for a seat in the Japanese Diet but lost.

Etoh battled problems from his alcoholism in later life. He had liver surgery in 1999. He had a stroke in 2003 and spent his last five years paralyzed and on tube feedings. In 2008, he died of liver cancer.

Etoh was voted into the Japanese Baseball Hall of Fame in 2010.

This biographical article is missing the person's: death place
Retrieved from "https://www.baseball-reference.com/bpv/index.php?title=Shinichi_Eto&oldid=1030876"
Categories: