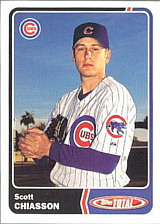 Scott Chiasson pitched ten games with the Chicago Cubs to an 11.12 career ERA.

Chiasson was 6-2 with 10 saves and a 2.51 ERA in his junior year of college, contributing to a NCAA Division III national title. He set a D-III tournament record with three saves and made the Baseball America and ABCA All-American teams. The Kansas City Royals took him in the fifth round of the 1998 amateur draft. Scott debuted with the 1998 GCL Royals, going 2-0 with a save in 13 relief appearances and a 4.81 ERA; he did strike out over a batter per inning. On June 10 of the next year, he became the player to be named later in a deal to the Oakland Athletics for Jay Witasick. Assigned to the Southern Oregon Timberjacks, Scott was 2-2 with a 5.22 ERA and 1.72 WHIP, primarily working as a starter. In 2000, he emerged as a prospect when he had a 11-4, 3.06 record for the Visalia Oaks. He saved two games as well and struck out 150 batters in 156 innings pitched, finishing 7th in the California League in ERA.

Chicago let him go anyway and he signed with the Colorado Rockies. Scott allowed 17 runs in 16 innings for the 2005 Colorado Springs Sky Sox, losing both of his decisions and allowing a .342 average, though he struck out 18. He broke his left arm while diving to first and asked for his release to spend time with his wife and new son. The Norwich Navigators were struggling with injuries, though, and coach Roger LaFrancois advised the club to pick up Chiasson. He had a 5.68 ERA in 15 games, but struck out 25 in 19 innings and allowed only a .217 average. Leaving the San Francisco Giants chain after that, he signed with the Cincinnati Reds. Bouncing back from three years of injuries and struggles, Scott went 3-2 with 29 saves and a 1.91 ERA for the Louisville Bats. He allowed just a .195 average in 60 games and appeared in more outings than any other International League pitcher.

After that season, Scott signed with the Yokohama BayStars of NPB. In March, he was diagnosed with shoulder pain and was still battling the injury months later, never appearing in a game. He joined the Mayos de Navojoa that winter and was 2-2 with 12 saves and a 3.08 ERA. The Houston Astros signed Chiasson for 2008. He ended up spending the season in the Mexican League and with the Norfolk Tides of the Baltimore Orioles system, kicking around south of the border until 2011.