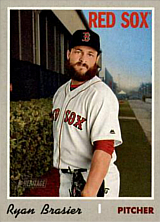 Ryan Brasier made his major league debut in 2013. After four years without any big league time, he returned in 2018 with a remarkable run out of the bullpen for the World Champion Boston Red Sox.

Ryan was called up to the majors early in 2013 while Nick Maronde got demoted. In his big league debut, he relieved Joe Blanton in the 9th inning of a 5-1 loss to the Baltimore Orioles, entering with a 3-0 deficit. After striking out Ryan Flaherty, he allowed a single to Nolan Reimold and a homer to Nate McLouth. He recovered to retire Manny Machado and Nick Markakis to end the inning. In 7 big league games, he posted a 2.00 ERA. Brasier would not return to the majors for nearly five years. He spent all of 2014 disabled with an elbow strain and eventual surgery to repair it and was outrighted off the Angels roster at the end of October. The following July, the Oakland A's took a minor league flier on him and he made 52 appearances over the next two seasons, primarily out of the bullpen of the Triple A Nashville Sounds. On December 14, 2016, Oakland sold his contract to the Hiroshima Toyo Carp. He made 26 appearances in NPB in 2017 to the tune of a 3.00 ERA. At the beginning of March 2018, Ryan caught on with a minor league deal with the Boston Red Sox. In 34 games, he was unbelievable, with a 1.34 ERA and 0.90 WHIP in 40 innings. This performance earned him a return to the big leagues.

Ryan returned on July 9, 2018, with a scoreless inning of work against the Texas Rangers for the BoSox. In 34 big league appearances, he continued to shine, finishing 2-0, 1.60 with a 7/29 BB/K ratio in 33 2/3 innings. He saw action in 9 postseason games between all 3 rounds, allowing one earned run in 8 2/3 innings while striking out 7 as the Red Sox won the World Series in 5 games. He made his first Opening Day roster in 2019 and recorded his first major league save on April 3 against Oakland. The season was a bit tougher than the prior year. He spent a month back in Pawtucket during the summer, with another sparkling ERA (0.96 in 10 appearances) on the farm, and appeared in 62 big league games. His big league ERA ballooned to 4.85 in 55 2/3 innings as he recorded 61 strikeouts and 7 saves.