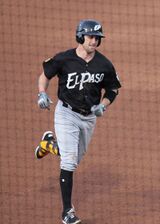 Patrick Kivlehan reached the majors in 2016 after playing for three different organizations in a short span.

He was a 4th round selection by the Seattle Mariners in the 2012 amateur draft. The scout was Mike Moriarty. A third baseman, he played his first season with the Everett AquaSox of the Northwest League, hitting a solid .301/.373/.511 in 72 games, with 17 doubles and 12 homers. He won the NWL batting title by 14 points over Taylor Ard, tied Ard for the home run lead, was second in extra-base hits (four shy of Ard), was second in total bases (144, 3 behind Ard), tied Balbino Fuenmayor for second in RBI (6 behind Ard), was third with 85 hits (behind Stephen Bruno and Kevin Medrano), was third in runs (46, behind Gioskar Amaya and Bruno), tied Royce Bolinger for third in average (after Bruno and Medrano) and tied Dane Phillips for 4th in doubles. Baseball America ranked him as the league's #10 prospect, between Amaya and Mac Williamson. He won the MVP award, giving him two player of the year awards after not even playing baseball for several years.

He was back with High Desert to begin 2014, but by mid-May, he was playing at the AA level for the Jackson Generals of the Southern League. He had his third straight solid season, with a batting line of .295/.363/.507, 32 doubles and 20 homers. He was 4th in the SL in slugging (between Cedric Hunter and Rangel Ravelo) and 7th in average (between Daniel Mayora and J.T. Realmuto). He was much better in the AFL this time, batting .280/.387/.473 with 22 RBI in 24 games for the Surprise Saguaros. He led the AFL in RBI, one over Gregory Bird and was third in runs (behind Bird and Gregory Roman). Baseball America rated him as Seattle's #4 prospect.

He continued his climb up the organizational ladder in 2015 when he spent the entire season in AAA with the Tacoma Rainiers of the Pacific Coast League. He found the going a bit tougher, as in 123 games, he hit .256/.313/.453, but still banged out 25 doubles and 22 homers, with 58 runs and 73 RBIs, though he missed time when he played for Team USA in the 2015 Pan American Games, reducing his counting stats. He tied Jabari Blash and Jon Singleton for 7th in the 2015 PCL in dingers. In the Pan Am Games, he was the main DH for the US and also saw a little action in LF. He hit .333/.379/.667 with two homers and 6 RBI in 7 games. He tied Harold Ramirez for 4th in slugging, tied for 8th in home runs and tied for 10th in RBI. In the Gold Medal game, he hit a two-run homer off Team Canada's Jeff Francis to open the scoring in the 2nd inning then scored in the 7th to tie the game at 4, but the US lost, 7-6, in 10 innings.

In spite of his good numbers at all minor league levels, Patrick faced a problem in that the Mariners had an All-Star caliber player in his prime at third base in Kyle Seager, limiting his prospects of getting a job with the team. This was remedied on December 2nd when he was sent to the Texas Rangers as the player to be named later in an earlier trade in which P Tom Wilhelmsen and OF James Jones also headed to the Lone Star State, with OF Leonys Martin and P Anthony Bass heading the other way. While in Texas, third base was manned by a likely future Hall of Famer in Adrian Beltre, he was getting on in years, making it more likely that there would be some playing time available for the young man from New Jersey. He had an eventful 2016 season however: he was assigned to the AAA Round Rock Express in spring training, then in late May was designated for assignment. The Mariners re-acquired him for future considerations, but he only played for Tacoma until the end of July, then he was designated for assignment again. He was then claimed off waivers by the San Diego Padres, who placed him with the El Paso Chihuahuas for two weeks until giving him his first shot at the big leagues on August 20th. In his debut game, facing the Arizona Diamondbacks, he went 2 for 5 with a solo home run off Robbie Ray accounting for his team's only run in a 2-1 loss.