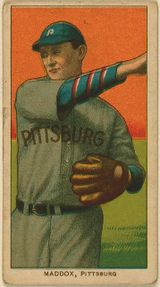 Nick Maddox was the Mark Fidrych of his day, minus the eccentricities, having a terrific but very short career. Maddox debuted in 1906 with the Cumberland Rooters. In 1907, he was with the Wheeling Stogies (going 13-10 but allowing only 47 runs in 29 games) before he joined the Pittsburgh Pirates later in the year. He completed all 6 of his starts as a 20-year-old rookie, going 5-1 and pitching a no-hitter. He won his first four starts, something no other Pirate would do until Gerrit Cole in 2013. His ERA was 0.83 and he only allowed 32 hits in 54 innings. He was the youngest pitcher ever to throw a no-hitter; his September 20th gem was just his third major league start. Through 2015, he is still the youngest pitcher to throw a no-hitter in the major leagues. Errors by Maddox and Honus Wagner allowed the Brooklyn Superbas' Emil Batch to score a run to in the game, but Pittsburgh still won, 2-1. It would be 44 years until the next Pirates no-hitter. Maddox had not allowed a hit in his previous two innings and would not allow one in his next two frames. John McGraw said: "He seems to have everything that winning pitchers should possess."

In 1910, though, his major league career was over. He appeared in 20 games, starting only 7, with a 3.40 ERA which was somewhat higher than the league ERA that year of 3.02. His hitting also dropped off, as he hit only .214, still respectable enough for a pitcher. Before the end of the season, he was purchased by the Kansas City Blues.

The similarity scores method shows the most similar player through 2006 as Seattle Bill James.

Maddox and his wife Elizabeth raised nine children. Maddox worked for Fort Pitt Brewery after his baseball career ended. Like many former major leaguers, he complained about the lack of talent from later performers: "These guys today aren't pitchers - they're throwers... Why, in my day, I'd throw one so fast past that guy Kiner he'd get pneumonia from the wind."

Sources include The Pittsburgh Pirates Encyclopedia by David Finoli and Bill Ranier, "The Almost Perfect Recall" by Paul Meyer in the 9/20/07 Pittsburgh Post-Gazette