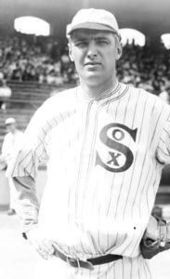 "Seattle" Bill James won 26 games in his best season in the big leagues but only played four years in the majors, winning just 37 games in total.

After playing for Saint Mary's College of California, James led the Northwestern League with 26 wins in 1912 while playing for the Seattle Indians (where he earned his nickname). He joined the Boston Braves in 1913 and went 6-10 with a respectable 2.79 ERA. The following summer, 1914, the Braves sat in last place on July 4th, but the "Miracle Braves" rallied to capture the National League pennant as James went 26-7. He went on to win a pair of games in the 1914 World Series against the Philadelphia Athletics, including a two-hitter in Game 2, as his club won the world championship.

James was almost an exact contemporary of another Bill James, known as "Big Bill James", who pitched for five American League teams from 1911 to 1919.

During World War I, James was an instructor at bomb-throwing for the U.S. Army. He coached in the Pacific Coast League in the 1920s. After baseball, he was an appraiser for Butte County, California, and was also an avid fisherman. He died from a stroke two days short of his 79th birthday and is buried at Memorial Park Cemetery in Oroville, California.