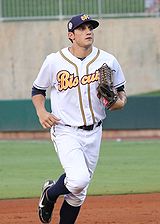 Mikie Mahtook was a first-round pick in 2011.

Mahtook hit .450 with 13 home runs and 25 steals as a high school senior, making All-State; he was also All-State in football. The Florida Marlins took him in the 39th round of the 2008 amateur draft but he continued on to college.

As a freshman in 2009, Mahtook started in center field for LSU. He hit .316/.377/.495. He was MVP of the 2009 Southeastern Conference Tournament after going 10 for 22. He came up big in the finals of the 2009 College World Series, singling in D.J. LeMahieu with the winning run in the 11th inning of a 7-6 win over Texas. Then, after Texas won game 2, he came up big in the finale. With two outs in the fifth, Mikie doubled home Jared Mitchell with the go-ahead run that put LSU ahead for good in a 11-4 romp. Overall, Mahtook hit .296 with 7 RBI in six CWS games. He failed to make the All-Tournament outfield, though his two outfield mates were both picked in Mitchell and Ryan Schimpf.

Moving to right field as a sophomore, Mahtook put up a .335/.433/.623 line with 14 home runs, 19 doubles, 22 steals (in 32 tries) and 68 runs in 63 games. He was second in the SEC in doubles (behind Jason Esposito) and third in runs (behind Taylor Dugas and Whit Merrifield). He hit for the cycle on April 6, the first LSU player to do that since Aaron Hill seven years earlier. Mahtook failed to make All-SEC.

That summer, Mahtook was picked for Team USA's college edition. He hit .271/.368/.390 for the summer and went 10-for-11 in steals; only Drew Maggi had more steals for the US. In their main event, the 2010 World University Championship, he started in the outfield alongside Jackie Bradley Jr. and George Springer, who would also be first-rounders the next year. Mahtook drove in three runs apiece in wins over Sri Lanka and China. For the event, he hit .444/.500/.778. In the Gold Medal game, he hit 8th and played right field. He was 1 for 3 against Miguel A. González as the US lost and settled for the Silver Medal. He joined Cuba's Yoennis Céspedes and Japan's Shota Ishimine as the All-Tournament outfielders.

His senior year, 2011, Mahtook kept on improving, to .383/.496/.709 with 14 home runs, 61 runs and 56 RBI in 56 games. He fielded .993, with only one error, and stole 29 bases while being caught 9 times. He reached base every single game. At the end of the regular season, he was leading the SEC in slugging, walks (41), triples (5) and steals and was second in average, home runs, OBP and runs. He was named All-SEC and was picked as an All-American outfielder by both Baseball America and the American Baseball Coaches Association. Collegiate Baseball left him off their first team, selecting Springer, Jason Krizan and Victor Roache instead.

Mahtook was taken by the Tampa Bay Rays with the 31st pick of the 2011 amateur draft. He was Tampa Bay's second pick, following Taylor Guerrieri; the choice was compensation for the loss of Rafael Soriano to free agency. Mahtook was the second college outfielder picked, after Springer. He signed for a $1,150,000 bonus. The scout was Rickey Drexler. 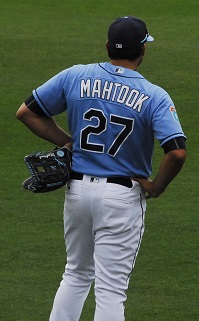 Mahtook failed to make the Rays' opening day roster in 2015, but was called up when John Jaso went on the disabled list in the season's first couple of days. His first appearance came on April 10th against the Miami Marlins as a pinch-hitter for pitcher Steve Geltz in the 3rd inning; he lined out to second base. He collected his first major league hit on April 15th when he homered off Mark Buehrle of the Toronto Blue Jays. He was sent down to the minors two days later, then returned a couple of times, in June and late July/early August, but all of those stints were brief and he received little playing time. Most of his season was spent with Durham where he hit .249 in 98 games, his statistics falling significantly from the previous year, as he was affected by the continual shuffling between AAA and the majors. On September 18th, he had a five-hit game for Tampa Bay in an 8-6 win over against the Baltimore Orioles, becoming the first Rays rookie to do so, and also tying a team record. He was doing very well since his call-up on September 1st, having gone 15 for 36 (.417) in his return to the big leagues and his first opportunity to get regular playing time. He finished the season at .295 in 41 games, with 9 homers and 19 RBIs, giving him an outstanding OPS+ of 165.

In spite of his success in his rookie year, the Rays sent Mikie to the minor leagues to begin 2016 and did not call him up until May 22nd. In 27 games, he had hit .305 with 1 homers and 7 RBIs. However, he failed to turn it on with Tampa Bay. At the end of May, he was hitting a mere .048, and by the middle of June had only managed to bring up his average to .164, in spite of getting significant playing time. He broke his left hand on June 20th and was out of action until the beginning of August. After a couple of rehabilitation stints in the low minors, he was back with Tampa on August 7th. He continued to struggle in August, hitting .163 for the month, then did slightly better in September, when he hit .254 with a pair of homers and 4 RBIs. Overall it was a lost season, as he ended up at .195/.231/.292 in 65 games.

On January 18, 2017, he was traded to the Detroit Tigers in return for a player to be named later who turned out to be minor league pitcher Drew Smith.

Mahtook's father, also named Mikie Mahtook, played college football at LSU but died suddenly of a heart attack at age 32, when Mikie Jr. was only 4. In 2015, Mikie started the Mikie Mahtook Foundation, named for his father, dedicated to education and prevention of heart disease.