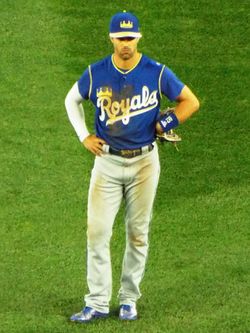 He was taken by the Kansas City Royals in the 9th round of the 2010 amateur draft after hitting .329 with 27 home runs, 197 runs, 106 RBI and 38 stolen bases in three years at University of South Carolina.

He made his major league debut for the Royals on May 18, 2016, getting his first major league hit that day. He split his time between left field, second and third base in his first month in the majors, showing some solid hitting skills. From May 23-June 1, he had a nine-game hitting streak during which he went 16 for 42 (.381). On June 13th, he hit a triple and also his first career home run to lead the Royals to a 2-1 win over the Cleveland Indians; the long ball came off Carlos Carrasco. He played 81 games in the majors, hitting .283 with 2 homers and 29 RBIs while scoring 44 runs.

In 2017, he lost a spring training battle for the starting second base job to Raul Mondesi and began the season in Omaha. He hit a scorching .412 in 9 games and was soon back in Kansas City, taking over for Mondesi when the latter failed to hit. On May 29th, in a game against the Detroit Tigers he made an unsuccessful bid to become the first Royals player to hit for the cycle since the great George Brett in 1990. He homered off Daniel Norris in his first at-bat, then followed with a triple and a double, but he flied out in his last plate appearance as the Royals lost, 10-7. This game was part of a 19-game hitting streak that ended on June 5th, the longest in the majors at that point of the season. On August 29th, his 3rd inning homer off Alex Cobb of the Tampa Bay Rays with two outs in the 3rd snapped a 45-inning scoreless streak by the Royals, just three innings shy of the major league record. The Royals went on to win the game, 6-2. On September 20th, he broke Toronto Blue Jays reliever Carlos Ramirez's streak of not giving up an earned run all year, spread among two minor league teams and the Blue Jays, with a lead-off homer in the 6th inning. The Royals eventually scored four runs by the time the inning ended, on their way to a 15-5 win. He finished the season at .288 in 145 games, with 32 doubles, 6 triples and 19 homers. He scored 80 runs and drove in 78 and led the American League with 34 stolen bases.

Merrifield had another strong season for a poor team in 2018, leading the AL in both hits (192) and stolen bases (45) for a team that lost 104 games. He raised his batting average to .304, scored 88 runs, hit 43 doubles and drove in 60 runs. His OPS+ was 121. He played mainly second base in 2017 and 2018, but the latter season, also had 39 games in the outfield. He finished the season on a strong run, with hits in his last 20 games. During that year, he started a consecutive games streak on June 24th that would eventually reach a team record 553 games by the time it ended in 2022. He then started 2019 right where he left off, as he had pushed the hitting streak to 28 games on April 7th, two short of the franchise record set by Hall of Famer George Brett in 1980. He tied Brett's mark on April 9th and beat it the next day, but it was snapped at 31 games when he went hitless on April 11th. He hit .302 while playing all 162 games that season and was named to the All-Star team for the first time. He led the American League in at-bats (681), hits (206) and triples (10) as well as times caught stealing (10) while scoring 105 runs and driving in 74. Defensively, he split his time between second base and right field, with occasional starts in center field as well.

Merrifield continued his consecutive game streak in 2020, playing all 60 of his team's games in the pandemic-shortened season. He was again a man without a regular position, seeing time in right field, center field and at second base, but was in the starting line-up every day as he batted .282 with 9 homers and 30 RBIs, scored 38 runs and once again led the AL in at-bats, with 238. His OPS+ was 105, his fourth straight year over 100. In 2021 however, even though he made his second All-Star team, he fell below 100 in OPS+, to 93, all the while leading the AL in doubles with 42 and stolen bases (40, against just 4 caught stealing). For the third straight year, he had more at-bats than anyone else in the league, with 684 as he made it a third straight season of appearing in everyone of his team's games. He scored 97 runs, but drew just 40 walks, for an OBP of .317 - rather mediocre for a leadoff hitter with limited power. He was back to playing a regular position that year, with 147 starts at second base.

His numbers continued to fall in 2022, as he was hitting just .240 after 84 games. That is when his consecutive games streak, which had by then reached 553 games and was the longest in the major leagues by a long shot, came to an end on July 11th when a toe injury forced him to sit out a doubleheader against the Detroit Tigers. But the Royals' young players were up to the task in his absence, as they swept both games, 3-1 and 7-3. A few days later, on July 14th, he was one of ten members of the Royals not to make the trip to Canada to play the Toronto Blue Jays because they were unvaccinated. His explanation for his stance did not go down well, as he hinted that, had the Royals been a contending team, he might have considered getting the vaccine. He was criticized extensively on social media, as exepected, but also by team President Dayton Moore, who said he was "disgusted" when he heard Merrifield's comments. Moore added that Merrifield had later apologized. Ironically, on August 2nd, Merrifield was traded to the Toronto Blue Jays at the trading deadline, in return for two younger players, Max Castillo and Samad Taylor. He was hitting .240 in 95 games with 6 homers and 42 RBIs at the time and eould obviously need to fix his vaccine situation in short order in order to play any home games with his new team. In response to questions about this, while he did not confirm he had received the vaccine, Merrifield said on August 4th that he would be with the Jays the next time they played in Toronto a week from then. On August 7th, he was at the center of a controversial play in Toronto's 3-2, 10-inning win over the Minnesota Twins: as the ghost runner on second base to start the inning, he showed his speed in advancing to third base on Santiago Espinal's shallow fly to center, then took off for home on another shallow fly ball, this one to left by Cavan Biggio. He was originally called out at home, but immediately complained that C Gary Sanchez had blocked the plate illegally, something that was confirmed when the Blue Jays appealed, and the decision was overturned. The Twins disagreed vehemently, leading to the expulsion of manager Rocco Baldelli, but Merrifield's run proved to be the difference as Jordan Romano kept the twins from scoring in the bottom of the 10th.