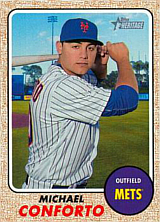 Michael Conforto is an All-Star outfielder with the New York Mets. He reached the majors just one year after being drafted.

Conforto was a first rounder of scout Jim Reeves and the Mets in 2014, going tenth overall. He made his debut that summer with the Brooklyn Cyclones, hitting .331 in 42 games. He began 2015 with the St. Lucie Mets, hitting .283 with 7 homers and 28 RBI in 46 games, before earning a promotion to the AA Binghamton Mets at the end of May. In the Eastern League, he was hitting .312 with 5 homers and 26 RBI in 45 games, being named to play in the 2015 Futures Game, when he was called up to New York at the end of July. The Mets were battling for a postseason slot but were frustrating their fans with their inability to score runs.

Michael made his big league debut on July 24, 2015. He started in left field and went 0-for-3 but drove in a run with a groundout in a 7-2 loss to the Los Angeles Dodgers. In his next game, July 25th, he went 4-for-4, including 2 doubles, and scored 4 runs in a 15-2 rout of the Dodgers. By driving in a run with a bases loaded hit-by-pitch the next day, he became only the second player in Mets history to drive in a run in his first three major league games; the first had been Jason Tyner in 2000. Michael was sent back to the minors on July 31st, when the Mets acquired Yoenis Cespedes at the trading deadline, but he came back a day later when Kirk Nieuwenhuis was placed on the disabled list. Michael ended up playing regularly in left field the rest of the way, and he and Céspedes were the team's two best hitters as the Mets took off in August and September, finishing well ahead of the preseason favorite Washington Nationals to win a division title. He hit .270 with 14 doubles, 9 homers, 30 runs scored and 26 RBI, putting up an OPS+ of 132. He only had one hit in the NLDS against the Los Angeles Dodgers, a homer off Zack Greinke in Game 1. He was shut out in the NLCS against the Chicago Cubs, going 0-for-8, but he was one of the few Mets hitters to do well in the World Series against the Kansas City Royals, as he finished 5-for-15 (.333) with a pair of homers, both coming at home in Game 4 on October 31st, against Chris Young and Danny Duffy, in a losing cause.

Conforto began 2016 as the Mets' regular left fielder and had a great April, hitting .365 with 4 homers. He fell back to earth in May, then struggled badly in the early part of June, as he hit only .148 from May 1 to June 25th, when he was sent down to the minors. The move seemed to help, as he hit .344 with 9 extra base hits in 16 games the AAA Las Vegas 51s and was brought back to New York on July 17th. He finished the season at .220 with 12 homers and 42 RBI in 109 games, not enough to convince the Mets' brass that he should be given a starting job the following season without having to earn it. He did not play in the Wild Card Game which the Mets lost to the San Francisco Giants to make an early exit from the postseason. He entered the 2017 season as part of a crowded outfield picture and not guaranteed any playing time, especially against lefties. As he had done the previous year, he started the season blazing hot, hitting .321 with 6 homers and 13 RBI in April. This time, he did not fade immediately, with a very solid May in which he hit .314 with 7 homers and 21 RBI. His performance stood out on a Mets team that was racked by injuries and poor performances and, by the time the All-Star Game rolled around, he was named the Mets' representative, having hit .284 with 14 homers and 41 RBI in 70 games. He continued to hit well over the next six weeks, adding another 13 homers, but on August 24th, he dislocated his left shoulder on a swing and miss in a game against the Arizona Diamondbacks. An MRI revealed a tear in the shoulder's posterior capsule, meaning he would not play again that season. His year ended with 108 games, a .280 average, 27 homers and 68 RBI.

He had his busiest season in 2018, playing 153 games and seeing time mainly in left and center field. He hit .243 with 28 homers and 82 RBI, leading the Mets in both homers and RBI by a wide margin. At the start of the 2019 season, he was playing exclusively in right field. He was hitting .271 in 42 games, with 9 homers and 21 RBI, when on May 16th he collided in the outfield with second baseman Robinson Cano and had to leave the game with a concussion. He hit his first grand slam twelve days later in Dodger Stadium, finishing the season with a .257 average, 33 home runs and 90 runs scored in 151 games. In 2020, with the season shortened to 60 games by the Coronavirus pandemic, he appeared in 54 games for the Mets, and had his best season, batting .322 with 9 homers and 31 RBIs, for an OPS+ of 154. It was a bit lost in the shuffle however, given the Mets missed the postseason in a disappointing year, and there was no All-Star Game either. In 2021, he fell back to .232 in 125 games, with 14 homers and 55 RBIs. His OPS+ was still decent, at 101, but there was no escaping the narrative that he was one of a group of Mets players who underperformed that year, leading to a second-half collapse and another season that ended short of the postseason.

He became a free agent after the 2021 season when he declined a qualifying offer from the Mets and was still unsigned when the 2021-2022 lockout put a freeze to player transactions. After the lockout was resolved, he remained unsigned and still did not have a team when the season started. An explanation was given in mid-April, when he underwent shoulder surgery, and it was announced that he would miss the entire 2022 season. He had hurt his right shoulder while training in January. He finally found a team on December 23, 2022, when the San Francisco Giants offered him a two-year deal worth $36 million. He was a consolation prize when their huge deal for SS Carlos Correa fell apart only a few days earlier.