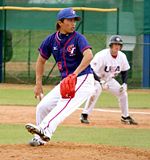 Lin pitched for Taiwan in the 2001 World Youth Championship. He made it to Taiwan's senior national team for the 2005 Asian Championship while still a teenager. In the 2006 Haarlem Baseball Week, he allowed no earned runs in 1 2/3 IP and got a win. He also appeared in the 2006 World University Championship, 2006 Asian Games and 2006 Intercontinental Cup. In the latter event, Lin went 1-0 and allowed 4 runs in 6 innings of work.

Lin went 1-0 with a 1.86 ERA in the 2007 World Port Tournament despite allowing 9 hits and 2 walks in 9 2/3 IP. In the 2008 Final Olympic Qualification Tournament, he allowed one hit and no runs in 3 innings as Taiwan earned a slot in the 2008 Olympics. During the 2008 Haarlem Baseball Week, the right-hander allowed only two hits and no runs in 8 2/3 innings, winning one game and saving another. Lin surrendered just 3 hits and a run in 10 2/3 IP in the 2008 World University Championship, going 1-1 with his loss coming to the USA.

Lin was the first overall pick in the new player draft for the Chinese Professional Baseball League in December 2008, taken before former major leaguer Chin-Hui Tsao. Lin was chosen by the Sinon Bulls. He was shortly thereafter put on Taiwan's roster for the 2009 World Baseball Classic but did not pitch in the Classic.

Lin made his CPBL debut with the Bulls in 2009.