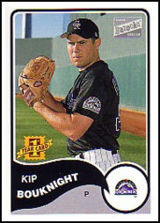 Kip Bouknight was a highly decorated college pitcher, but pitched in the minor leagues for 9 years, six at double-A, without reaching the majors.

Kip had a fine freshman year at the University of South Carolina, going 11-3 with a 4.07 ERA. He made the Southeastern Conference All-Conference team despite having just missed the top 10 in the league in ERA. He made the Baseball America All-Freshman team. In summer ball, he was 5-2 with a 3.10 ERA for the Wilson Tobs. In 1999, Bouknight went 7-4 with a 3.86 ERA and a save. Moving up to the Cape Cod League that summer, he had a 5-2, 2.25 record for the Chatham A's.

Oddly, Bouknight was not taken until the 21st round of the 2000 amateur draft, when the Oakland Athletics picked him. The primary reasons for his not being selected among the top 600 players was that he was not overpowering and was deemed short for a pitcher.

Bouknight returned to South Carolina in 2001 and slipped to 10-4, 3.99 with 2 saves. He became the school's all-time strikeout and win leader.

He was selected by the Colorado Rockies in the 13th round of the 2001 amateur draft.

Bouknight debuted professionally with the Tri-City Dust Devils, going 3-5 with a 2.78 ERA but a .229 opponent average and a K:BB ratio of 4.53:1 while fanning over a batter per inning. He combined with Pat Lynch to pitch a perfect game that year. He was one strikeout behind New York-Penn League leader Charlie Manning.

While playing for the Salem Avalanche, Bouknight threw a no-hitter on August 7, 2002. He had a 14-7, 3.35 record. He tied Denny Tamayo for the Carolina League lead in victories.

For 2007, Bouknight was signed by the Pittsburgh Pirates. He went 11-6 with a 3.83 ERA for the Altoona Curve and 1-1 with a 4.50 ERA for the Indianapolis Indians. In 2008, he pitched for the Reading Phillies of the Eastern League, but was hit hardf to the tune of a 6.95 ERA in 16 starts, during which he went 3-8. That was his last taste of organized baseball. After being released by the Phillies in mid-year, he signed with the Somerset Patriots of the independent Atlantic League and was 5-1, 2.52 the rest of the year. he was back with Somerset in 2009, where he went 6-8, 5.17 in 25 games. He decided to retire after that season.