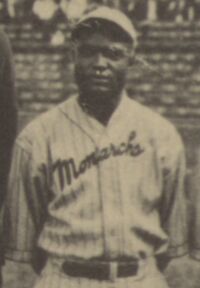 After a nomadic and far-from-stellar decade in the 1910s, outfielder Hurley McNair became an all-around star in the first years of the Negro National League. McNair was the first player in the history of the Kansas City Monarchs to get five hits in a game. He led the league at least twice in triples, doubles and walks and at least once each in total bases, hits and OBP. In the Negro Leagues, he hit .321, 15th all-time.

McNair served at Fort Steven Little in Nogales, Arizona as part of the all-black Twenty-Fifth Infantry Wreckers. He began his professional baseball career with the Chicago Giants in 1911. He hit .232 for the club the next year, then moved to the Brooklyn Royal Giants. In 1914, he returned to Chicago and hit .231 as the cleanup hitter and right fielder for the 1915 Chicago American Giants. He moved to the All-Nations team in 1917 and the Detroit Stars in 1919.

At age 31, McNair finally emerged as a star, upon joining the Monarchs. He hit .332 and led the 1920 Negro National League in doubles (20) and triples (8) while finishing fifth with 10 steals. In an exhibition that off-season against white major leaguers, he went 2 for 12. He also starred in the 1920-1921 California Winter League, hitting .313/?/.534 and leading the league in doubles (11) while tying Dobie Moore for the triple lead (6). His two home runs were second to Bullet Rogan.

During 1923, he hit fourth or third for the Monarchs as they won their first title. He helped out with a .327/.406/.481 batting line. He scored 82 runs (second behind Heavy Johnson, legged out 10 triples (tying Newt Joseph and George Shively for third behind Turkey Stearnes and Johnson), drove in 65, had 123 hits (third in the NNL), was 8th in average, 9th in slugging, 4th in OBP, fifth in total bases (181), stole 23 bases (second to Charleston) and tied Charleston for the league lead with 49 walks.

In 1924, McNair hit .346. In the first Negro World Series, he only went 5 for 35, but he saved game three defensively when he threw out Judy Johnson at home in the 12th inning. That winter, Hurley hit .407/?/.525 for the Los Angeles White Sox in the California Winter League, finishing second to Moore in batting average.

After retiring as a player, McNair worked as an umpire in the Negro American League. He was once chased around the field by players wielding bats, who backed away after he pulled a knife on them.

McNair helped teach Willie Wells how to hit the curveball. He was known as a moody, self-centered person who did things his way. He once also supposedly homered when he grabbed a fungo bat, rushing to the batter's box as he had been getting a drink of water when his turn came.