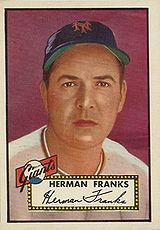 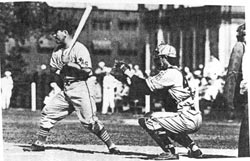 Catcher Herman Franks played several seasons in the majors prior to World War II and returned to the big leagues for a few more seasons after the War. Following his playing days, he was a manager and executive.

After playing baseball, basketball, football, and track in high school, Franks attended the University of Utah for a year. He began his pro career with the Hollywood Stars in 1932 and eventually reached the majors with the St. Louis Cardinals in 1939. He was acquired by the Brooklyn Dodgers prior to the 1940 season and spent two years there before serving three and a half years in the Navy during World War II.

After the War, Franks returned to the Dodgers organization as a teammate of Jackie Robinson with the Montreal Royals in 1946 and as player-manager of the St. Paul Saints the next summer. He returned to the majors with the Philadelphia Athletics in 1947 and 1948 and played in his final big league game with the New York Giants in 1949.

Franks joined the Giants coaching staff (under former Dodgers manager Leo Durocher) in 1949 and remained with the team until 1955. He scouted for the Giants in 1957, then coached the team in San Francisco in 1958 before two more years as a Giant scout. He began 1961 as the manager and general manager of the Salt Lake City Bees but stepped down as skipper after 8 games to concentrate on his GM duties. He returned to the Giants in 1964 as a coach and then managed the team from 1965 to 1968, leading them to four straight second-place finishes.