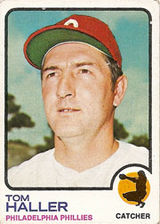 He played twelve seasons in the majors, mostly for the San Francisco Giants and the Los Angeles Dodgers. He was a good hitter, especially for a catcher, and he was a respected defensive catcher although he never won a Gold Glove.

He was a three-time All-Star and appeared in the 1962 World Series with the Giants, where he slugged .571, platooning with Ed Bailey. Bailey, interestingly enough, is the second most similar player to Haller (according to the similarity scores method) behind Ernie Whitt.

Tom's brother was longtime umpire Bill Haller. On July 14, 1972, during Tom's only season in the American League with the Detroit Tigers, Tom caught while Bill was the ump.