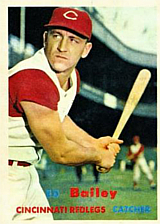 "Watching this strong, beautifully built man hit, I've often felt that if he didn't try to pull every pitch, but just met the ball, his natural power would carry it out of any ballpark -- more often." - Stan Musial, Sport magazine, June 1964

Even with his power and walk-drawing ability, Bailey usually shared catching duties, only once exceeding 400 at-bats in a season. In spite of that, he slugged 155 home runs in his career. With the Reds, he was usually platooned with Smoky Burgess, while with the San Francisco Giants he was platooned with Tom Haller, which the similarity scores method sees as one of the ten most similar players to Bailey. He rarely played any position other than catcher.

Ed, who missed the 1951 and 1952 seasons due to military service, was the brother of pitcher Jim Bailey. They were teammates on the Cincinnati Redlegs in 1959. His brother-in-law, Al Neil, was a minor league slugger. Following his career, Ed worked in public relations for Waste Management and BFI Industries for a number of years. He was an aide to U S Representative John J Duncan, Sr. for 12 years, then served on the Knoxville City Council from 1983 to 1995. He died in 2007 after a battle with throat cancer.