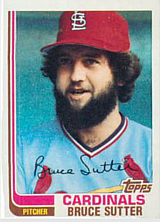 Bruce Sutter is widely considered to have perfected and popularized the split-fingered fastball. He was elected to the Hall of Fame on January 10, 2006, the first pitcher elected without starting a single game in the major leagues.

Sutter, who was born January 8, 1953 in Lancaster, Pennsylvania (his last name is pronounced with a "long U", i.e. the first syllable rhymes with "Bruce"), is a former right-handed relief pitcher in Major League Baseball who became possibly the first pitcher to make effective use of the split-finger fastball. One of the sport's dominant relievers in the late 1970s and early 1980s, he became the only pitcher to lead the National League in saves five times (1979-1982, 1984), and retired with 300 saves – at the time, the third highest total in history, behind Rollie Fingers (341) and Rich "Goose" Gossage (302). His save total was an NL record until broken by Lee Smith in 1993; Sutter had set the NL record in 1982 with his 194th save, surpassing the mark held by Roy Face. In his first nine seasons, only Kent Tekulve made more appearances, and he saved 133 of the Chicago Cubs' 379 wins between 1976 and 1980. In 1979, Sutter won the NL's Cy Young Award as the league's top pitcher.

Sutter was a member of three different teams during his career from 1976 to 1988. After being selected by the Washington Senators in the 21st round of the June 1970 draft, Sutter instead attended Old Dominion University, and later signed with the Cubs as a free agent in September 1971. He spent slightly over four seasons in the Cubs' farm system, and played on the 1975 Texas League (Double A) champion Midland Cubs. He joined the Chicago Cubs in May 1976, and after five seasons was traded to the St. Louis Cardinals in December 1980. He joined the Atlanta Braves in December 1984 as a free agent.

In 1977, when he first emerged as a dominant reliever, he set a record by notching at least one strikeout in 39 straight appearances from June 1st to October 2nd. During the streak, he had 87 strikeouts in 65 innings, a K rate that off the charts for the period as batters could not refrain from swinging at his signature pitch, which looked like a mediocre fastball down the middle until the bottom suddenly dropped out, making them look silly as they swung well above the ball. Sutter's record held for almost 40 years as it was only topped in 2014, by Aroldis Chapman. On September 8th, he struck out three Montreal Expos (Ellis Valentine, Gary Carter, and Larry Parrish) on nine pitches in the 9th inning, marking the 21st time in major league history that a pitcher had pitched an immaculate inning. Sutter had also struck out the side (though not on nine pitches) upon entering the game in the 8th inning, giving him six consecutive strikeouts, tying the NL record for a reliever. Sutter earned the win when the Cubs won in the 10th inning.

In 1979, Sutter saved 37 games for the Cubs, tying the NL record held by Clay Carroll (1972) and Rollie Fingers (1978). In addition to the Cy Young Award, Sutter also won both the Rolaids Relief Man of the Year Award and the Sporting News Fireman of the Year Award in 1979, 1981, 1982 and 1984. He was a member of the Cardinals team which won the 1982 World Series over the Milwaukee Brewers and was credited with two saves in that Series, including the Series-clinching save in Game 7 which ended with a strikeout of Gorman Thomas and a leaping hug by catcher and World Series MVP Darrell Porter; Sutter also earned the save in the pennant-clinching victory over the Atlanta Braves in the NLCS.

He was momentarily the highest-paid player in baseball, although he agreed to have his Atlanta contract configured so that he was paid $750,000 for six years with the rest going into an insurance fund that was to be structured to pay him $1,000,000 for 30 years.

Upon retirement, Sutter stayed near Atlanta, GA with his wife and three sons. He has had three shoulder surgeries, three knee surgeries, an elbow operation, and two back operations.

Sutter's uniform number was retired by the Cardinals in 2006. No other player is allowed to wear it for any team as his number (42) was retired from all major league teams in honor of Jackie Robinson in 1997. He is also a member of the St. Louis Cardinals Hall of Fame.

His son, Chad Sutter, was a catcher who played for Tulane University and was selected by the New York Yankees in the 23rd round (711st overall) of the 1999 amateur draft.

On January 10, 2006, Sutter was elected to the Hall of Fame in his 13th year of eligibility by receiving 400 votes out of a possible 520, or 76.9%. He was the first pitcher ever elected who had never started a game, and with 1,042 1/3 career innings pitched, was the first to end his career with fewer than 1,700. Sutter's Hall of Fame plaque depicts him wearing a Cardinals cap.

Some or all content from this article is licensed under the GNU Free Documentation License. It uses material from the Wikipedia article "Bruce Sutter".