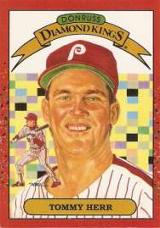 Tom Herr played thirteen years in the majors, mostly with the St. Louis Cardinals. He was in three World Series with them in the 1980s. In his best full season, 1985, he drove in 110 runs, made the All-Star team, and was fifth in the MVP voting. In a partial season in 1983, appearing in 89 games, he hit .323.

He is the player out of the University of Delaware with the most major league games played and at-bats.

Herr was an assistant coach at his alma mater, Hempfield High School in Landisville, PA, for twelve seasons. He then managed the Lancaster Barnstormers of the Atlantic League in 2005-2006. Herr was named manager of the Hagerstown Suns for 2007. He returned to Lancaster as a coach in 2009 under former teammate, manager Von Hayes, and then replaced him at the helm in 2009.

He is the father of minor leaguers Aaron Herr and Jordan Herr.