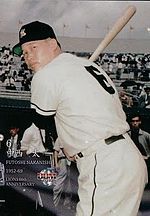 Futoshi Nakanishi
(Young One With Power)

As a kid with nothing to do when school could not meet during World War II, Nakanishi was the star at sumo wrestling, running and fighting. When the war ended, his teachers advised him to take up baseball and he did so in junior high school. Despite lacking balls and other basic equipment, they had to prepare mentally for games. Like his idol Fumio Fujimura, Nakanishi became a third baseman.

After a fine high school career, Futoshi wanted to go to Waseda University but his parents arranged a deal for a 700,000-yen signing bonus and 35,000 yen per month with the Nishitetsu Lions without telling him. He had a fine rookie campaign in 1952, hitting .281/.327/.464 and winning Pacific League rookie of the year honors. In '53, he switched his batting style to focus on power, relying on a sharp twist to his form to provide power. He avoided any notion of a sophomore slump and hit .314/.370/.619. He led the PL in slugging, runs (92), hits (146), homers (36), total bases (288) and RBI (86) while stealing 36 in 52 tries. It was the third .300-30-30 year in Nippon Pro Baseball history. On August 29, he set a record (since broken) for the longest NPB homer, taking Yoshikazu Hayashi out of the ballpark for an estimated 520'. He outhomered both the Daiei Stars and Kintetsu Pearls that year. He made the first of seven All-Star teams and made his first Best Nine. He missed the Triple Crown that year by two hits, as Isami Okamoto edged him for the batting title.

The 1956 season continued his stardom with a .325/.393/.593 year. He led in slugging, homers (29) and RBI (95) and lost the batting crown by .0005 to Yasumitsu Toyoda. Nakanishi had sat out two games after his team clinched their first PL pennant and some felt that he had let teammate Toyoda beat him out; he said it was only an individual title and that the team's success mattered most. He made the Best Nine but missed the All-Star team. His four straight PL home run titles have only been beaten (or matched) by Katsuya Nomura. He won his only MVP award that season. In the 1956 Japan Series, they stunned the Yomiuri Giants and Nakanishi hit .273/.320/.545 with two homers and six RBI in six games. He also got married that year - to manager Osamu Mihara's daughter.

Futoshi became a player-manager in '62, replacing Tokuji Kawasaki at the helm. Nakanishi opines that the team felt sorry for him due to his injuries and says that he relied heavily on pitching coach Tadashi Wakabayashi for advice at first. Nishitetsu went 62-68-6 that year and he hit .268/.354/.366 in 71 AB.

Nakanishi then had several jobs as a hitting coach, for the Kintetsu Buffaloes (1985-90), the Yomiuri Giants (1992), Chiba Lotte Marines (1994) and Orix Blue Wave (1995), meaning that he had been a manager or coach of seven teams in the 12-team NPB. He also briefly managed Chiba Lotte in 1994, taking over the helm after Soroku Yagisawa was axed on July 31. He later worked as a consultant for the Yakult Swallows and helped Roberto Petagine adjust to Japanese baseball.

In 1999, Nakanishi was voted into the Japanese Baseball Hall of Fame.