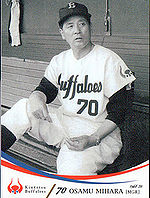 During World War II, Mihara was a private in the Japanese army.

Mihara began his managerial career at age 35 with the 1947 Yomiuri team, replacing Haruyasu Nakajima at the helm during the season. He improved the club from 8th when he took over to 5th. They improved to 83-55-2 and second place in 1948 and won the Japanese Professional Baseball League pennant the next year when they were 48-23-1 under his lead; he missed several months of the season. In 1949, he wrote Kyojin Gun to Tomo ni, a memoir of his Giants days.

In 1960 Osamu took over the previously last-place Taiyo Whales and led them to a 70-56-4 season, taking the Central League pennant. It was the only pennant in the club's decades of play. Mihara took them to a Japan Series victory, sweeping the Daimai Orions. The Whales fell back to last the next season at 50-75-5 and through 1967, Mihara's last year as manager, they alternated between competitive second-place finishes and bad fourth- or fifth- place seasons.

As a manager, Mihara was known for atypical moves like removing a player who's 3 for 3 (arguing he was less likely to get a hit yet again), steal while trailing by four runs or bunting when trailing. When these moves worked, it was called "Mihara magic" and was very popular with his players. Other players were highly critical of what they viewed as irrational and unsuccessful strategy. He also aimed for a more homer-friendly style of play than Japan's base-to-base style used previously. Mihara was also a critic of the harsh training methods employed by most NPB teams of the period (he said "I can win without hitting my players"), though he was not a guy to let his young pitchers rest their arms either. He is the manager who used Kazuhisa Inao 18 times in a 27-game stretch to finish 1958 and then six of the seven games in the 1958 Japan Series.

Overall his managerial record was 1,687-1,453-108. He is second all-time (as of 2005) behind Kazuto Tsuruoka in wins and is tied for the all-time loss lead with Sadayoshi Fujimoto. He was inducted into the Japanese Baseball Hall of Fame in 1983.