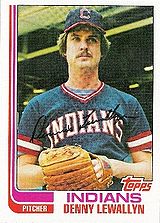 Dennis Lewallyn pitched in the big leagues for 8 consecutive seasons; however he never appeared in more than 7 games in any of those seasons. His son Bryan Lewallyn has been a college coach.

Lewallyn was the classic minor league star who could not stick in the major leagues. He spent six seasons with the Los Angeles Dodgers AAA affiliate, the Albuquerque Dukes, winning 74 games for them from 1975-1980. The Dodgers of the time were a strong team, and he could not find a permanent spot on their pitching staff.

Ted Power was a teammate of Lewallyn in Albuquerque in 1979 and 1980, and like Lewallyn was to pitch several years in Albuquerque while struggling to find a spot on the Dodgers' roster. Unlike Lewallyn, though, Power eventually broke through and had a long career in the majors.

After five brief appearances with the Dodgers, Lewallyn came up once with the Texas Rangers and twice with the Cleveland Indians. Lifetime, in his 8 seasons in the majors, he pitched 80 2/3 innings, with an ERA of 4.48. He also pitched for the Tigres del Licey in the Dominican League at least one season.

After retiring, Lewallyn was a pitching coach in the Los Angeles Dodgers organization for thirteen years with the Vero Beach Dodgers from 1983 to 1994 (at least).

After the 2006 season, Lewallyn joined the Chicago Cubs as pitching coach of the Tennessee Smokies, a position he held through 2010. In 2011-2012 he was the Cubs' minor league pitching coordinator.

Lewallyn moved to the Atlanta Braves organization as pitching coach of the Mississippi Braves in 2013-2016, Florida Fire Frogs in 2017, and Mississippi again in 2018-2019.