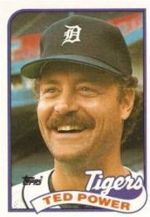 Ted Power had a long major league baseball career although he started out in the crowded Los Angeles Dodgers minor league system. He was drafted in the 5th round in 1976, and would not make his first appearance in the majors until 1981, after going 18-3 for the Albuquerque Dukes, a team full of future major leaguers. He was the losing pitcher in Nolan Ryan's 5th no-hitter on September 26th that year; it was only Power's 5th appearance in the Majors. The Dodgers won the 1981 World Series, but Power did not appear.

Traded to the Cincinnati Reds in 1983, he would spend several years pitching under manager Pete Rose (1984-1987), and then became a journeyman, pitching for seven teams in his last six years.

He was primarily a starter from 1987-1989, but otherwise mostly a reliever. He led the league in appearances in 1984. In Game 6 of the 1990 NLCS, the Pittsburgh Pirates used him as their starter against the Reds, even though he had not started a single game all year. He gave up a run in 2 1/3 innings before giving way to lefty Zane Smith; the strategy did not work, as the Reds still won, 2-1.

Chris Denorfia is his son-in-law.