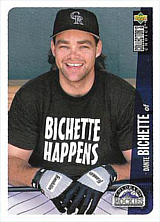 Dante Bichette was one of the most-feared hitters of the 1990s and a key component of the "Blake Street Bombers", the big bats of the 1995 Colorado Rockies lineup that also included Andres Galarraga, Vinny Castilla and Hall of Famer Larry Walker who led the team to the NL Wild Card. Bichette's production relied heavily on the influence of Coors Field and Mile High Stadium and his park-adjusted statistics are not as impressive as his reputation. The park factor in Colorado during Bichette's days varied from 116 to 129. His namesake, Dante Bichette, Jr., was a first-round pick in the 2011 amateur draft and his younger son, Bo Bichette, was a rookie sensation with the Toronto Blue Jays in 2019. 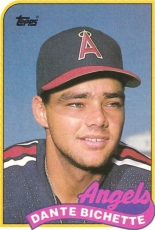 Finding his way in Colorado[edit]

Dante was shipped to the Colorado Rockies for outfielder Kevin Reimer, who never returned to the majors after that season, on November 17, 1992. It was in the thin air that Bichette made his mark, hitting at least 21 home runs each of his six seasons there. He was a consistent All-Star, making the All-Star team from 1994-1996 and 1998, and won a 1995 Silver Slugger Award while finishing second in the NL MVP race. Despite routinely finishing among the league leaders in key offensive statistics, his OPS+ was generally below-average or average for his position, except for 1995. That year, he set a franchise record with a 23-game hitting streak, a record which stood until 2013 when Michael Cuddyer had a streak of 27 games. He also set a record for the highest homer-to-walk ratio for anyone hitting 40 or more homers: he hit 40 homers while walking just 22 times, for a ratio of 1.82 to 1. His road OPS was often under 700, indicating Colorado's environment was dramatically inflating his statistics.

He hit the first home run in Rockies history. It came in the 7th inning of the team's second game, on April 7, 1993, against Bret Saberhagen of the New York Mets. It was also the first run and RBI in team history, as the Rockies had been shut out, 3-0, in their first ever game on April 5th, and lost the second game, 6-1. Those scoring woes were soon forgotten as they scored 11 runs in their home opener at Mile High Stadium two days later and the legend of the "Blake Street Bombers" was born.

Bichette was traded to the Cincinnati Reds in 1999, then the Boston Red Sox in 2000. The Red Sox let him go after the 2001 season, and he signed with the Los Angeles Dodgers for the 2002 season. In the middle of spring training he announced his retirement [1] to spend more time with his family.

After a two-year lay-off, Bichette returned to baseball in 2004 to play with the Nashua Pride of the independent Atlantic League. Bichette proved he still could hit, tearing up the league with 18 home runs and 54 RBI in 49 games, along with a line of .312/.370/.653. Still blessed with a strong arm, he even took a try pitching, posting a 0-1 record and 12.00 ERA in 3 games (1 start) in 6 innings of work. He was featured in Sports Illustrated for this feat. Bichette did not make the league All-Star team or finish among the leaders in key offensive categories even at this low level of competition. When asked why he returned to baseball, he said he could not get it out of his blood but had no intention of returning to the majors.

After his retirement as a player, Bichette focussed on coaching his son Dante Jr., who was selected in the supplemental first round of the 2011 amateur draft. He coached his son's team to an appearance in the Little League World Series in 2005 and later with Orangewood Christian High School. His younger son, Bo Bichette, was also a promising high school player thanks to his father's tutelage. After being drafted by the Toronto Blue Jays in the in the 2nd round of the 2016 Amateur Draft, he made his big league debut in 2019.

Dante enjoyed the coaching experience so much that he accepted to return to the major leagues as hitting coach of the Rockies after his former teammate Walt Weiss was hired as the team's manager in 2013. Weiss's last job had also been as a coach in the high school ranks. He stayed only for that year however. In 2020, he was invited to spring training by the Blue Jays as a special instructor. The team brass liked his work so much that they offered him an official job with the team as assistant hitting coach before the season began. In 2021, with MLB having limited the number of coaches teams could have, he was simply listed as a special assistant.