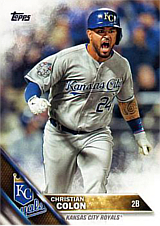 Christian Colón has seen action in parts of six big league seasons. He won a ring with the Kansas City Royals in 2015.

Colón moved a lot in high school due to his father's job. He was All-State in Texas as a freshman, then was a batting champion in Utah as a sophomore. He played for the US in the 2005 World Youth Championship, hitting .517 for the Silver Medalists with 14 runs scored, second on the team. He hit .417 as a junior in California and was All-County. He was MVP of the 2006 AFLAC All-American High School Baseball Classic after scoring 3 runs and stealing three bases to help the West win, 9-8. He batted .435 with 16 steals as a high school senior, again winning All-County. The San Diego Padres took him in the 10th round of the 2007 amateur draft but he opted for college.

Christian hit .329/.406/.444 as a college freshman, winning Freshman All-American honors from Baseball America (second team behind Rick Hague) and Collegiate Baseball. He set the Cal State Fullerton record with 21 sacrifice hits, third in NCAA Division I. He finished third in the Big West with 59 runs scored (four behind leader Ryan Royster) and tied for the lead with 13 times hit by pitch. Colón played for Team USA's college edition in 2008, hitting .263 while being the only player to appear in every game. He led the team with five steals and tied Fullerton teammate Josh Fellhauer for the most hits with 26. He hit .276/.363/.276 in the 2008 Haarlem Baseball Week while tying Giorvis Duvergel for fourth with eight hits. Hitting third in the Gold Medal game, he was 2-for-5 and was caught stealing once in a win over Cuba. I n the 2008 World University Championship, he batted only .167/.250/.278 for the USA. In the Gold Medal game, he was 1-for-5 in the 1-0 win over Japan; he got the final assist, retiring Japanese star Keijiro Matsumoto on a grounder to short.

Colón batted .357/.442/.519 as a sophomore. He led the Big West with 91 hits (tied with Ben Orloff) and 82 runs scored, was third in total bases (135) and times plunked (18) and was 6th in OBP, tying for 7th in NCAA Division I in runs scored. While he lost All-Conference honors at shortstop to Orloff, he was named second-team All-American by Baseball America, behind Stephen Cardullo. He was 4-for-8 with a homer in the 2009 College World Series. Christian became the first captain of Team USA's college edition in 2009. He hit .362 for the summer, leading the team in hits (34), slugging (.459), homers (5), RBI (37), runs scored (31) and steals (24 in 23 games) before breaking his leg in a slide. Baseball America named him the Summer League Player of the Year. His junior year, he hit .358/.444/.630 through June 8 with 18 home runs, 70 runs scored and 67 RBI in 61 games, making first-team All-Conference at shortstop. The Kansas City Royals made him the fourth pick of the 2010 draft after Bryce Harper, Jameson Taillon and Manny Machado. He was the first player chosen from a four year college.

Colón reached the major leagues on July 1, 2014 when he went 0-for-2 in a 10-2 loss against the Minnesota Twins, coming on as a pinch-hitter and staying in to play shortstop. He went 4-for-12 in 6 games before returning to the minors. In 88 minor league games that year, he hit .310 with 8 homers and 37 RBI, showing he had nothing more to prove. He came back to Kansas City to stay at the beginning of August. He was generally used as a utility infielder, but still batted .333 (15-for-45) with 5 doubles and a triple. The Royals made the postseason for the first time since 1985, playing host for the American League Wild Card Game against the Oakland Athletics. Christian was one of the game's unlikely heroes. The game went into extra innings, tied 7-7, when Christian was called on to pinch hit for Terrance Gore in the 10th; Gore had come in as a pinch runner for designated hitter Billy Butler in the 8th. With Eric Hosmer on first and nobody out, Colón laid down a sacrifice bunt against A's closer Sean Doolittle to move his teammate into scoring position, but he was left stranded and the game continued. Oakland took an 8-7 lead in the top of the 12th, and Colón came up again with one out and Hosmer on third base, courtesy of a triple. He hit a high chopper to third for an infield single, driving in Hosmer with the tying run. Alex Gordon popped out for the second out, but Colón stole second base, the seventh steal for the Royals in the game, a new postseason record. He came in to score the winning run when Salvador Perez singled down the third base line, sending Kauffman Stadium into a frenzy.

Despite his high draft stock, Colón never became a big league regular, peaking at 54 games in 2016. He did see more postseason heroics at least. In 2015, he received his only World Series at bat, driving in Jarrod Dyson with the Series-clinching run in the top of the 12th inning against the New York Mets, giving the Royals their first title in 30 years. Colón made the club in 2017, only to be designated for assignment in May, bouncing to the Miami Marlins for 17 games and resurfacing for 8 games, batting .500 (3-for-6) with the Cincinnati Reds in 2019. He returned to the Reds in 2020 and appeared in 11 games. Colón completed his playing career in the Toronto Blue Jays system in 2021.

Colón immediately leapt into the coaching ranks and served as the Northwest Arkansas Naturals assistant hitting coach in 2022.