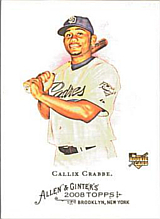 Callix Crabbe was the 11th major leaguer from the Virgin Islands and the fourth from St. Thomas. He was one of the rare players whose first and last names are both unique in MLB history (there are no other big leaguers named either Callix or Crabbe).

Callix moved to Georgia in his teens. He was taken in the 32nd round of the 2000 amateur draft by the Atlanta Braves as a draft-and-follow pick. He went on to Manatee Community College and was selected by the Milwaukee Brewers in the 12th round of the 2002 amateur draft. Crabbe debuted with the Ogden Raptors, hitting .328/.407/.472 with 22 steals in 31 tries and 55 runs in 67 games. He tied two others for second in the Pioneer League in swipes, trailing only Brandon Simon, and placed sixth in batting average while leading the league's second basemen with 21 errors. In 2003, Callix batted .260/.356/.346 with the Beloit Snappers, scoring 79 runs and stealing 25 in 34 tries. He produced at a .291/.367/.419 clip for the 2004 High Desert Mavericks with 89 runs scored, 34 steals (caught 11 times) and 11 triples. He tied Erick Aybar and Fred Lewis for second in the California League in triples. He led Cal League second basemen in putouts (241), assists (356) and errors (21) and made the All-Star Team as the top second baseman.

Following the 2007 season, Callix was selected by the San Diego Padres in the Rule 5 draft, and made his big league debut in 2008. It marked the first time a player from the Virgin Islands appeared in the majors since August 6, 2005, when Midre Cummings played his last game with the Baltimore Orioles. Crabbe's first plate appearance came in the 7th inning of a 2-2 tie against the Houston Astros as a pinch hitter for Enrique Gonzalez. Facing Oscar Villarreal, he flew out to left field. In May, after 21 appearances and hitting .176/.282/.206 with four runs scored and a steal, the Padres returned him to the Brewers. He finished the year with 69 games for Nashville, hitting .270. He would never make it back to the majors.

In 2009, Crabbe signed with the Seattle Mariners as a free agent, but had a poor season with the bat. In 75 games with the AAA Tacoma Rainiers, he hit only .210, but hardly did better in AA, batting .212 in 36 games for the West Tenn Diamond Jaxx. The Mariners did not retain him and he moved to the Toronto Blue Jays organization in 2010. Following his struggles the previous year, he was sent to the AA New Hampshire Fisher Cats; he played 81 games mainly at second base and hit .225/.310/.330. He was promoted to the AAA Las Vegas 51s for 10 games, but hit only .200. He did steal 20 bases between the two stops. In 2011, he was back at New Hampshire, and had his best season at the plate in three years, putting up a batting average of .259 in 69 games, with an OBP of .348, ending his career.

Following his retirement as a player, he served as an instructor for six years at the IMG Academy in Bradenton, FL and founded a sports development center in Tampa. In 2019, he became a coach for the first time as assistant hitting coach of the Texas Rangers under new manager Chris Woodward.