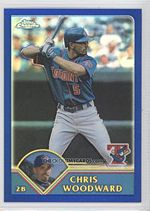 Chris Woodward is the only player from the 54th round of the 1994 amateur draft to make the major leagues.

Chris spent 1999-2004 as a member of the Toronto Blue Jays. He then went to the New York Mets for two seasons (2005 and 2006), spent 2007 with the Atlanta Braves and split the 2009 season between the Boston Red Sox and Seattle Mariners. He was back in Seattle in 2010, for only 8 games, posting the following numbers: .158/.273/.211 over 19 at-bats. He was brought back by the Blue Jays in 2011 to cover for an injured Aaron Hill (placed on the DL on April 24th). Woodward was demoted to the AAA Las Vegas 51s on the 28th however, going hitless in just 4 at-bats for the Jays. He finished his major league career by playing a few games in September of that season, ending the year with no hits in 10 at-bats. He played one last season in the minor leagues, with Las Vegas in 2012, where he hit .285 with 25 doubles in 89 games, before calling it a career.

After retiring as a player, he was the roving minor league infield coordinator of the Seattle Mariners. In 2014, he was appointed infield coach of the big league team, taking the seventh coaching slot on the team's coaching staff, the one often used by teams to name an assistant hitting coach. He moved up to first base coach in 2015, then was let go at the end of the year when the M's fired manager Lloyd McClendon. He was then hired by the Los Angeles Dodgers to be their third base coach in 2016, but before that, he served as the manager for the New Zealand national team at the 2017 World Baseball Classic Qualifiers held in Sydney, Australia in February of that year. After the 2017 season, he was identified as one of the finalists to replace the fired Joe Girardi as manager of the New York Yankees.

His name continued to circulate among managerial contenders after the 2018 season and on November 2nd, news emerged that he had been hired by the Texas Rangers to become their manager in 2019. The search had been particularly wide-ranging, with at least 11 candidates having received serious consideration. In his first year, the Rangers showed some marked improvement in the first half of his first season, as they were in contention for a wild card spot, but faded away in the second half. However, they finished in last place in their division in both 2020 and 2021; they also lost over 100 games in 2021. They went on a spending spree for free agents before the 2022 season, but it did not help as the Rangers were at 51-63 on August 15th when Woodward was fired. Coach Tony Beasley was named to replace him on an interim basis.