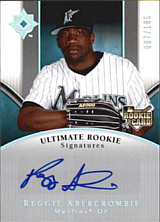 Outfielder Reggie Abercrombie was selected by the Los Angeles Dodgers as a draft-and-follow pick in the 23rd round of the 1999 amateur draft. After a year of junior college, he was signed by scout Lon Joyce and made his pro debut in the Pioneer League in 2000, stealing 32 bases in 54 games. He joined the Wilmington Waves the next year and stole 44 bases and hit 10 homers. He advanced to AA in 2003. Abercrombie was slowed by injuries in 2004 and, midway through the season, was traded with Koyie Hill to the Arizona Diamondbacks for Steve Finley and Brent Mayne. Between the 2003-2004 seasons, Abercrombie drew a combined 28 walks versus 287 strikeouts in 220 games. Before the 2005 season, he was claimed off waivers by the Florida Marlins. He split the year between A and AA, hitting 25 home runs between the two levels.

Abercrombie made his big league debut with the Marlins in 2006, a part of the Fish's first youth movement under the Jeffrey Loria regime which also included Hanley Ramírez, Dan Uggla and Josh Willingham (among others). On April 19, he hit a home run an estimated 486 feet off Reds left-hander Mike Gosling at the Great American Ball Park in Cincinnati. He scuffled in two years as a Fish irregular, with a .208/.263/.329 line in 146 games over two seasons. His big league days came to a close after two stints patrolling the outfield with the 2008 Houston Astros.

Reggie later enjoyed a productive career in the independent leagues, becoming a fan favorite while slugging 87 home runs over parts of six seasons (2014-2015; 2016-2019) with the Winnipeg Goldeyes of the new American Association. He retired following the 2019 season.